Euro rises against sterling and dollar after strong data

Euro is back around 86.5p sterling, renewing pressure on Irish exporters 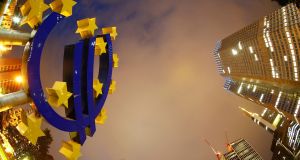 The euro climbed as high as $1.12680 to beat the previous day’s high by a whisker. Photograph: Kai Pfaffenbach/Reuters

The euro set a new six-month month high against the US dollar on Tuesday and the region’s shares made gains as the latest economic data made for some encouraging reading, especially in Germany.

Euro zone PMI surveys, showing the bloc’s firms on their strongest run since 2011, lifted the mood.

The euro climbed as high as $1.12680 to beat the previous day’s high by a whisker. Against sterling the euro is now trading around 86.5p, having traded around 86.7p earlier,its strongest level since March.

The strength of the euro against sterling and the US dollar will make life more difficult for Irish exporters, who had seen some respite on the sterling rate in particular in recent weeks.

Alongside strong headline numbers, one of the most eye-catching details in the data was the biggest manufacturing sector job growth reading in the survey’s 20-year history and overall employment gains were the second best in a decade.

“It’s a very good result and it’s broad based. We’ve got a good pace of growth here. The fact we have maintained this high level in May is great news for second quarter GDP,” said Chris Williamson, chief business economist at IHS Markit.”

Signs that euro zone authorities and the International Monetary Fund remain some way apart on Greece’s debt problems combined with the strong data to nag at bond markets. Greece’s short-dated government bond yields rose sharply as the IMF’s chief negotiator stuck to its stance that there needs to be more realism on what Athens can deliver.

The prospect of the ECB scaling down its multi-trillion euro stimulus programme meanwhile nudged up yields on German government bonds and other higher-rated government debt.