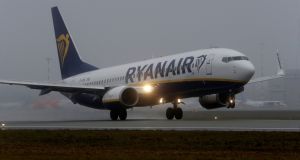 Ryanair’s share price was more than €17 at one stage as a Davy analyst said it flirted with all-time highs. Photograph: Ints Kalnins/Reuters

It was a busy day on the stock market in Dublin, while in Britain the pound fell as polls showed the lead of prime minister Theresa May’s ruling Conservatives contracting.

The euro surged to a more than six-month high, while the dollar fell back after early signs of encouragement.

The biggest action of the day in Dublin came as Glanbia Co-op completed the placement of 8.7 million ordinary shares in Glanbia plc, equivalent to approximately 3 per cent of Glanbia plc’s issued share capital, at a price of €17.80 per share. It raised €155 million.

Kingspan warned late last month that global shortages of the key chemical used to make rigid insulation panels, methylene diphenyl diisocyanate (MDI), has been driving up prices for the material this year. It finished the day down 1.6 per cent.

Food company Greencore, which is publishing results on Tuesday, was down 1.8 per cent. Ryanair’s share price was more than €17 at one stage as a Davy analyst said it flirted with all-time highs.

Sterling fell after two weekend polls showed Mrs May’s ruling Conservatives taking a hit after parts of its election manifesto came under fire. The pound had risen in the last month as some expected a landslide win that would allow for smoother exit negotiations with the European Union.

Along with strength in commodities stocks, the weaker pound propelled the FTSE 100 to a 0.4 per cent gain, holding near last week’s record highs, and outperforming the euro zone STOXX 600 which fell 0.2 per cent.

Domestically focused mid-cap stocks outperformed blue-chips and hit a new high as Barclays recommended investors “buy British” and brave this unloved area of the market. The FTSE 250 is up 10.1 per cent this year, double the gains of the large-cap benchmark.

Marks & Spencer rose to the top of the FTSE in later trading, gaining 3 per cent. Goldman Sachs said several UK hedge funds were buying the stock in the run-up to its results on Wednesday.

The euro surged to a more than six-month high on Monday after German chancellor Angela Merkel said it was “too weak” while oil prices were bolstered by expectations that top exporters will extend supply curbs this week.

European shares struggled to maintain momentum, but the US stock market gained, lifted by defence and tech stocks, after US president Donald Trump announced arms deals of up to $350 billion with Saudi Arabia over the weekend.

The pan-European FTSEurofirst 300 index lost 0.09 per cent and MSCI’s gauge of stocks across the globe gained 0.43 per cent.

Currency markets flipped 180 degrees as Dr Merkel, during a trip to a Berlin school, made a surprise reference to the euro being weak because of the European Central Bank’s ultra-low interest rates and money-printing programme.

Until that point, the single currency had been in the red, but the comments saw it swiftly climb to a six-month high $1.1250 and bring the morning’s rebound in the dollar to an abrupt halt. The euro was last up 0.22 per cent at $1.1229.

Against a basket of currencies, the dollar opened higher after closing lower on Friday, when it had its largest weekly drop since April 2016. But on Monday, it quickly lost steam, falling back to low levels where it was trading in November.

The dollar index fell 0.15 per cent. US Treasury yields were little changed as selling tied to this week’s government and corporate bond supply offset safe-haven bids underpinned by worries about investigations into possible links between Trump’s campaign officials and Russia.

1 Fianna Fáil may have just pressed the pause button on the property market
2 UK to prioritise EU trade deal over one with United States
3 Who are Ireland’s 17 billionaires?
4 My father in a nursing home wants to gift me his house
5 Are there annual limits on inheritances or gifts to a child?
6 Eason puts Blanchardstown store on market at €16m
7 State ranked highly for attracting skilled workers but low on gender equality
8 CVC must reveal Six Nations interest before Pro14 bid
9 London fintech company Nuroco to expand here
10 Belfast regeneration project worth £500m gets green light
Real news has value SUBSCRIBE