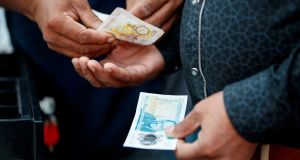 Many political clouds hang over the UK’s economic outlook, while the the euro zone’s economy is strengthening. Photograph: AFP

The euro has hit its strongest level against sterling in eight years, reflecting the diverging economic outlook for the euro zone and the UK and its implications for their respective central banks’ policymaking.

The euro rose above 92p on Wednesday in London on the back of a flurry of better than expected euro-zone economic indicators, reaching a level not seen since October 2009 – with the exception of last autumn’s momentary “flash crash”.

Sterling has underperformed most other major currencies this year, led by the euro and Scandinavian exchange rates.

The euro has rallied more than 10 per cent from a low for the year of 83p back in April, a run that has sparked some in the currency market to call for parity between the two currencies as the UK negotiates its exit from the EU.

Hans Redeker, global head of forex strategy at Morgan Stanley, forecasts euro-sterling parity by the end of this year, with a further rise to £1.02 per euro in the first quarter of next year.

He blamed much of the sterling depreciation on the uncertainty around Brexit, saying the economic environment “looks increasingly fragile” as “investment spending is softening and export strength is underperforming”.

The possibility of a leadership challenge to UK prime minister Theresa May at the Conservatives’ annual conference in October was fuelling investors’ concerns, Mr Redeker said, and “the question of [political] leadership results in an additional risk discount” to sterling.

In sharp contrast to the political clouds that are overshadowing the UK’s economic outlook, the euro zone’s economy is going from strength to strength.

Economic data published on Wednesday showed activity picking up in August after a brief hiatus in July. The manufacturing sector has proved particularly strong, with the rate of private-sector expansion running at about the best seen over the past six years.

The euro-zone economic releases also pushed the euro stronger against the dollar, shedding recent losses to rise 0.4 per cent to $1.180.

UK economic data have been resilient recently, with better than expected public finances and rising retail sales. However, productivity is declining and the political uncertainty of Brexit is weighing on markets.

The renewed weakness in sterling also reflects investor expectations that the Bank of England will maintain its current low interest rate policy for some time. In the wake of the Bank of England meeting earlier this month, the policy-sensitive two-year gilt yield has fallen back below the current base rate of 0.25 per cent.

In contrast, investors are primed for the European Central Bank to signal a moderation in bond buying from its current monthly pace of €60 billion in the coming year as the economy gains momentum. The ECB meets on September 7th, while markets also await Mario Draghi speaking at Jackson Hole, the annual symposium for central bankers, on Friday.

Not all market observers agree that sterling-euro is heading for parity, however. Analysts at UBS Wealth Management argue that “sterling looks extremely undervalued on most measures”. – (Copyright The Financial Times Limited 2017)

1 Who are Ireland’s 17 billionaires?
2 State subsidises public sector retirees to cover gap until State pension
3 My father in a nursing home wants to gift me his house
4 Are there annual limits on inheritances or gifts to a child?
5 Corporate tax change is inevitable, says Donohoe
6 Swiss police suspect Davos plumbers of being Russian spies
7 Domino’s Pizza spared costs despite losing appeal
8 Countries that fail to attract immigrants will lose out – Microsoft chief
9 Trump holds America up as ‘example for the world’
10 Pretax profits decline sharply at Tuam-based car tech firm
Real news has value SUBSCRIBE