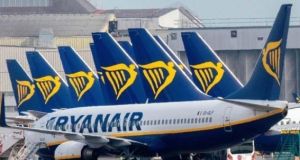 Ryanair closed down 4% in Dublin

European shares closed at two-week lows on Monday as a slump in German business morale underscored the damage from tighter Covid-19 restrictions, while investors feared a slow vaccine rollout could further delay an economic recovery.

The Iseq closed down 2 per cent on Monday, with banks and transportation stocks leading the index lower.

Ryanair was among the worst performers in Dublin as airlines across Europe were hammered as investors mulled tougher quarantines for travellers. Ryanair was down 4 per cent to €14.24, but outdid low-cost rivals such as EasyJet, which closed 6.6 per cent lower in London.

Staying with travel, ferry operator Irish Continental was down 3 per cent to €3.90.

Iseq heavyweight CRH lost 2.9 per cent to close at €35.08. Other fallers included Cairn Homes, down 4 per cent, and Smurfit Kappa, which ended 1.9 per cent lower.

The blue-chip FTSE 100 index fell 0.8 per cent, declining for the third consecutive session, with travel and energy stocks falling the most. The mid-cap index dropped 1.2 per cent to a one-month low.

Online fashion retailers Boohoo and ASOS surged 4.7 per cent and 5.6 per cent each. Boohoo bought the Debenhams brand, while ASOS was in talks to buy the key brands of Philip Green’s collapsed Arcadia group as the Covid-19 pandemic turbocharges the industry’s shift to digital.

Recruiter SThree gained 3.5 per cent after its profit, which nearly halved, still managed to beat market expectations, and the company said it had resumed dividends.

Markets took a turn for the worse after US drugmaker Merck said it would end development of its two Covid-19 vaccines.

Aer Lingus and British Airways-owner IAG, Lufthansa and Air France KLM fell between 3.3 per cent and 7.7 per cent, while retailers fell 1.5 per cent. This came after several Spanish regions ramped up anti-coronavirus measures, while France is looking at a third national lockdown.

French state-controlled power group EDF slumped 15.6 per cent to the bottom of STOXX 600 after broadcaster BFM Business reported that the European Commission wanted a further six months of talks on a planned restructuring.

The Nasdaq index hit a record high in early trading on Monday as investors remained optimistic at the start of a busy week of earnings from mega-cap technology companies, while economy-sensitive cyclical stocks gave back recent gains.

The so-called “stay-at-home” winners including Microsoft, Facebook and Apple, rose between 1.7 per cent and 4.3 per cent following upbeat results from Netflix last week.

Microsoft, scheduled to report results on Tuesday, rose 0.7 per cent as Wedbush raised its price target on the software maker’s stock on expectations of further growth in its cloud business for 2021.

The S&P 500 technology sector rose 1.1 per cent, while Tesla added 6.1 per cent ahead of its quarterly results on Wednesday.

Merck fell 0.8 per cent after the drugmaker said it would stop development of its two Covid-19 vaccines citing inferior immune responses.

Advanced Micro Devices added 1.3 per cent after RBC raised its price target on the chipmaker’s shares.

Videogame retailer GameStop surged 52.2 per cent after having already gained about 250 per cent since the beginning of 2021. – Additional reporting: Reuters