Iseq falls on thin trading volumes though Kerry Group ahead by 2.4 per cent 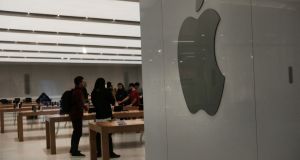 A revenue warning from Apple rocked equity markets around the globe yesterday as concerns over a damaging China-US trade battle and its impact on world economic growth boosted assets considered safer investments, such as bonds and the Japanese yen.

Technology stocks led a sell-off in Asian, European and US stock markets after Apple, blaming weaker iPhone sales in China, cut its revenue forecast for the first time in nearly 12 years.

The Iseq fell marginally on very thin post-Christmas trading volumes, with just €207 million worth of shares changing hands, about half the normal rate.

Ryanair fell 1.6 per cent to €10.35, despite reporting brisk December passenger numbers and securing a UK operating licence that will ensure its British-based planes are not grounded in the event of a no-deal Brexit.

Dalata Hotel Group fell more than 2 per cent to close at €4.77. The State’s largest hotel company announced it had closed a deal for a new 212-bed hotel in the City of London, which will be rebranded under its Clayton moniker.

Retailers rose to the top of the FTSE 100 following a decent showing from high street chain Next, but it wasn’t enough to lift London’s top flight out of the red caused by Apple’s woes.

Shares in Next closed at the top of the FTSE 100, rising 173p to 4,350p. The high street chain cut its annual profit forecast and predicted falling earnings over the year ahead, but revealed a solid Christmas performance.

Tesco, Associated British Foods, Morrisons and Marks & Spencer all rode high off the back of Next’s Christmas trading update.

Concerns over economic growth in top metals consumer China sent Rio Tinto, BHP, Glencore and Antofagasta down between 1.3 and 4.8 per cent.

The pan-European STOXX 600 fell 0.9 per cent as weak US manufacturing data added to nerves over slowing global growth.

Europe’s tech sector sank 4.2 per cent, only a few points short of its worst daily performance since the Brexit vote in June 2016. Chipmakers that supply parts to Apple were the worst hit. Shares in AMS, which provides facial recognition sensors used in the latest iPhones, fell 23.1 per cent to the bottom of the STOXX.

Wall Street plunged yesterday after slowing US factory activity on the heels of Apple’s fuelled fears of a global economic slowdown.

The magnitude of Apple’s revenue shortfall sent shockwaves through the technology sector, which pulled all three major US stock indexes down more than 2 per cent, with the Nasdaq posting a 3 per cent loss. S&P Technology companies slid 5.1 per cent, its biggest one-day percentage drop since August 2011.

A report from the Institute for Supply Management showed US factory activity in December suffered the biggest drop since October 2008, the height of the financial crisis.

Major carmakers reported weak US new car sales in December, with Ford and General Motors reporting sales falling by 8.8 per cent and 2.7 per cent, respectively. Ford shares fell 1.5 per cent, while GM dropped 4.1 per cent.