The Irish Times looks at some of the Irish links in the latest leak organised by the ICIJ. 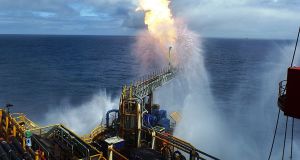 Shell E & P Ireland Offshore Inc, a company with an address in Nassau, has had a number of Irish directors over the years, starting in 2000. The company is associated with the Corrib gas project in Co Mayo. Photograph: Shell E&P Ireland Limited

Two companies registered in the Bahamas and used by Dublin property investor Paul Fenelon for investments in the UK are among companies of Irish interest on the Corporate Registry of the Bahamas.

The registry, normally difficult to access, is being made publicly available by the International Consortium of Investigative Journalists (ICIJ), of which The Irish Times is a media partner.

While most companies in the Bahamas used nominee directors, and the ownership of companies is not revealed, an examination of the registry nevertheless shows a significant number of companies with Irish links.

The Bahamas are a well-known tax haven and there is nothing illegal about being connected with a company from that jurisdiction. There are reasons, such as privacy and tax planing, for having a company registered there.

The companies used by Fenelon for his investments in the UK also had links with the Panamanian law firm Mossack Fonseca, whose files were leaked earlier this year as part of an ICIJ project, the Panama Papers, with which The Irish Times was also involved.

Those files show the companies in Bahamas associated with Fenelon, Planmark Holdings Ltd and Kayne Properties Ltd, were in turn owned by a trust established in Jersey in 2003, and which appears to have later moved residency to Mauritius.

Fenelon (52), then with an address on Sorrento Road, Killiney, Co Dublin, was the owner of Planmark Holdings Ltd, and Kayne Properties Ltd, when ownership of the companies was transferred to the PF Trust, in August 2003, according to the files.

The documents in the files state that the main activities of the companies were in the UK. In the mid-2000s, Planmark was associated with companies in the UK that had the franchise for Nike Town outlets, though this business later went into administration. Efforts to contact Fenelon met with no response. It is not known what his current business activities are.

The PF Trust was established in 2003 by Beresford Trustees Ltd, of Jersey. Administration was subsequently moved to a trust services operation in Mauritius, in 2007. The property settled on the trust was the two Bahamas-based companies, and the beneficiaries of the trust were: Fenelon; Armanda Fenelon; Nicholas Fenelon; Ralph Fenelon; and Geoffrey Fenelon.

The files also show that in 2000 a meeting in Jersey voted to accept two loans being offered to Planmark by Bank of Scotland (Ireland), dated August and September of that year. The documents show that the former was for Stg£1.5 million and was to help in the purchase of a commercial investment property on Fleet Street, London. The security was to include a lease between Kayne Properties and McDonald’s Property Company Ltd, and the rent arising from that lease. The security was to also include a personal guarantee from Fenelon.

The security, according to a letter of offer in the leaked files, was to include a charge over unit 14, Killiney Shopping Centre (Xtra-vision unit) and an unconditional guarantee from Fenelon.

Other companies with links to Ireland include three on the Bahamas registry that have links to AIB. Santerra Properties Ltd, Fanquali Ltd, and Maycot Properties Ltd are listed as having had secretarial services provided by a company called AIB Worthy Trust Ltd, of AIB House, St Helier, during the 2000s. The latest entries are for 2009. The ownership of the companies is not revealed in the registry.

Property in Bradford owned by a company in the Bahamas called Avocet Holdings Ltd was placed in receivership in 2012 by the Irish Bank Resolution Corporation, the State-owned body into which Anglo Irish Bank and Irish Nationwide Building Society were subsumed.

The documents show the company had taken out a mortgage in October 1996 and used Law Russell House, Vicar Lane, Bradford, as security. It is not shown in the documents whether the loan was issued originally by Irish Nationwide or Anglo.

A company, Hazelville Holdings Ltd, registered a mortgage in 2003 with Anglo Irish Asset Finance, a UK subsidiary of Anglo Irish Bank, with the property mortgaged being a number of buildings on Gloucester Place, George Street, and Portman Close, London.

Waterford solicitor Mark Walsh, of Kenny Stephenson Chapman, is a director of Sargat Consulting Ltd of the Bahamas, as is Laurie Burke, a former employee of the law firm. Burke said the company was established for an Irish accountant who was a client of his firm, and who used the company in the provision of accountancy services in Ireland. The client, he said, divided his time between the Bahamas and Ireland, and set up Sargat for confidentiality reasons.

Patrick Joseph Horkan, property developer, Paul Horkan, businessman, and Alice Horkan, housewife, all of Waterford, Ireland, were directors of Strathclyde International Ltd, in June 2011, the Bahamas registry shows. It is not known what the company was used for and efforts to contact the directors were not successful.

Shell E & P Ireland Offshore Inc, a company with an address in Nassau, has had a number of Irish directors over the years, starting in 2000. The company is associated with the Corrib gas project in Co Mayo.

The former directors of Oyster Circle Bahamas Ltd include Paul Crowe, of Celbridge, Co Kildare, who was a director between 2007 and 2009, when the Irish business, Oyster Circle, managed by Crowe, was marketing a destinations club with million-euro properties made available to people who invested €300,000 to join the club.

Reports at the time said those who joined got a part of a business that had high-end properties in Spain, Portugal, Italy and France, with plans in 2006 for expanding into South Africa, the US, and the Bahamas, including other places. A petition for the winding up of the Oyster Circle plc, with an address in Blackrock, Co Dublin, was served in August 2013. Crowe could not be contacted.

The Bahamas are home to a large number of companies which are associated with funds that have links with Ireland. Among such firms that appear on the Bahamas register and have Irish directors are ELK Euro Fund Ltd. Windmill Fund Ltd, and Hatford Growth Ltd.

A company called Nutt Tree Ltd was incorporated in December of last year. Its directors are listed as Michelle Teresa McCarthy, Co Clare, Ireland, and Miriam McCarthy, of Dublin, Ireland. There is nothing in the registry to indicate the purpose of the company and efforts to contact the directors were unsuccessful.

BNRG Renewables, an international renewable energy group with an address in the IFSC, Dublin 1, established BNRG Caribbean Ltd, with an address in the Bahamas, in 2012, to pursue opportunities in the Caribbean and Latin America. The directors appointed included David Maguire, of Howth, Co Dublin, and the late Neil Holman, of Ballsbridge, Dublin 4, the registry shows. The two directors founded BNRG Renewables in 2007.