Waterford rolls the dice in Vegas 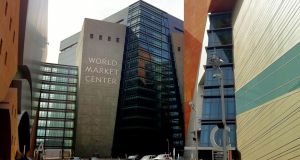 The World Market Center in Las Vegas, where Waterford Wedgwood will open a store

As if anyone needed reminding that things have changed – and changed utterly – at the luxury goods company Waterford Wedgwood Royal Doulton (WWRD), its American private equity owners have taken a gamble on a new retail outlet in Sin City.

It would have been unthinkable in the more genteel days of Tony O’Reilly, but the company will next week cut the ribbon an a store at the World Market Center in Las Vegas, the largest homewares showroom in the world.

KPS, which bought Waterford out of administration in 2009, is driving the company’s revival “as a luxurious and sophisticated brand that will expand globally across the luxury markets”.

The company will use the store to showcase its range of products including those made with the endorsement of designers Vera Wang, Jasper Conran, Monique Lhuillier and John Rocha. And, of course, the volcanic chef Gordon Ramsay.

Whatever about Vegas, KPS’s deal for WWRD looks like a gamble that has paid off. It was reported earlier this year that it has taken cash dividends of about $66 million out of the company over the last two years. Happy days, considering KPS paid a reputed $100m after it collapsed into receivership when it was under the control of O’Reilly.

It’s a pity the former workers at its Waterford glass factory, whose pensions were stuffed when the company collapsed, have yet to hit the jackpot.

Lynne Embleton to become CEO of Air Lingus 21:37
Forestry licences: Grounds for challenge will not be narrowed 21:15
Conroy Gold proposes deal with Turkish miner for Border gold prospect 21:12
O’Flynn Group gets go-ahead for €625m development in Dublin 21:05
‘Ireland is a great country, but we can’t help ourselves being nasty to people sometimes’ 20:26
Search executive
jobs on irishtimes.com