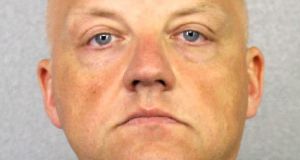 Oliver Schmidt, who was head of compliance in the US in 2012 and 2015, is said to be among the VW employees allegedly involved in the briefing. Photograph: AP

Volkswagen’s top management was briefed in the summer of 2015 about the cheating software at the centre of the company’s diesel emissions scandal, and ordered its continued concealment, according to criminal charges unsealed by US prosecutors on Monday.

VW employees briefed “executive management” in July 2015 at the German carmaker’s headquarters in Wolfsburg Germany about the use of software-based defeat devices to understate emissions in official tests, says a criminal complaint about the company’s former head of compliance in the United States.

“Rather than advocate for disclosure of the defeat device to US regulators, VW executive management authorised its continued concealment,” adds the complaint.

The VW employees allegedly involved in the briefing included Oliver Schmidt, a VW veteran who was head of compliance in the US in 2012 and 2015 and is scheduled to be arraigned on Monday in Miami.

It comes at a time when VW is seeking to finalise a criminal settlement with the US authorities over the emissions scandal.

Such a deal would be a milestone in VW’s efforts to draw a line under the affair, which became the worst crisis in the company’s history.

Mr Schmidt is accused of conspiring for nearly a decade to conceal from US regulators the existence of defeat devices in VW diesel cars, according to the criminal complaint filed in federal court in Detroit.

He is also accused of defrauding the US by impairing the Environmental Protection Agency’s emissions control programme, cheating VW customers via interstate wires and violating the Clean Air Act.

For several weeks before VW admitted to US regulators in September 2015 that its diesel cars had cheated emissions tests, employees worried about the danger of criminal penalties for their actions, says the criminal complaint.

VW’s “executive management” in Wolfsburg requested a briefing on the US situation, which took place on July 27th, 2015, says the criminal complaint.

For that briefing, Mr Schmidt and several colleagues prepared a slide on the potential outcomes of a meeting with California regulators scheduled for the following week.

A “positive” meeting would result in the needed certification to sell VW cars in the US. But a “negative” outcome raised the question “Indictment?”, according to the criminal complaint.

Mr Schmidt’s arrest by the Federal Bureau of Investigation marks the latest development in a scandal dating back more than a decade. In 2006, VW engineers realised that a new diesel engine they had designed would not be powerful enough to satisfy car owners and not green enough to pass muster with regulators.

The new engine was the centrepiece of an ambitious strategy to boost VW sales in the US market. Rather than admit defeat, the company wrote software called a defeat device to cheat emissions tests.

The device was programmed to recognise when a diesel car was undergoing the government’s standard laboratory tests and operate in accordance with EPA limits.

But when driven on the road, the software allowed the cars to spew up to 40 times the allowable levels of nitrogen oxides.

“VW employees knew that if they had told the truth and disclosed the existence of the defeat device, VW could not have sold any of its diesel vehicles in the United States,” says the criminal complaint.

VW’s scheme began unravelling in early 2014 when a study ordered by the International Council on Clean Transportation, a non-profit organisation, detected the higher on the road emissions by VW diesel cars.

In April 2014, after learning of the study’s findings, Mr Schmidt emailed a colleague about the issue: “It should first be decided whether we are honest. If we are not honest, everything stays as it is.”

“VW employees determined not to disclose to US regulators that the tested vehicle models operated with a defeat device,” says the criminal complaint.

“Instead, VW employees pursued a strategy of concealing the defeat device in responding to questions from US regulators, while appearing to co-operate.”

By the summer of 2015, Schmidt was directly involved in efforts to deal with regulators’ increasingly pointed questions.

James Robert Liang, a VW engineer, in September became the first person to plead guilty to criminal charges, including conspiring to defraud US customers and regulators. He agreed to co-operate with US government investigators in return for leniency.

Prosecutors also are getting help from two other VW insiders, who worked in the company’s engine development department, says the criminal complaint.

They are co-operating in return for assurances that they will not be prosecuted in the United States.

From 2012 to 2015, Mr Schmidt was general manager of VW’s environmental engineering office in Michigan, which was responsible for dealing with US regulatory agencies such as the EPA and the California Air Resources Board.

In March 2015, he was promoted to the post of principal deputy to the head of engine development in Wolfsburg.

1 Ireland stands to benefit in a big way from investing in public transport
2 ‘The recovery needs to be a full-scale economic renewal’
3 Small businesses are cannon fodder in zealous anti-virus experiment
4 Tax and the Pandemic Unemployment Payment: Your questions answered
5 Michael Smurfit: ‘I asked Trump to invite me to the White House for my 80th birthday’
6 Household savings soar as consumers stop spending
7 Minister calls on EU to act against tobacco firms ‘undermining’ menthol ban in Ireland
8 Ryanair expects air fares to fall when flights take off again
9 Irish business of Carluccio’s restaurants to be wound up
10 ‘It’s safe to fly’, EU aviation safety boss says
Real news has value SUBSCRIBE