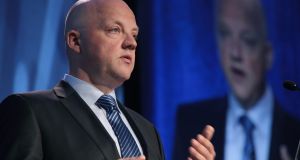 Oliver Schmidt: Volkswagen’s executive in the US has been arrested on charges of conspiracy in connection with the VW emissions scandal. Photograph: EPA/Joe Wilssens

The FBI has arrested a Volkswagen executive in the US accused in civil lawsuits of having an important role in covering up the diesel emissions scandal.

Oliver Schmidt, who was head of VW’s US compliance office, was arrested on Saturday.

The arrest comes at a time when the German carmaker is seeking to finalise a criminal settlement with the US authorities over the emissions scandal, in which VW admitted diesel cars were fitted with cheating software to understate harmful emissions in official tests.

Such a deal would be a milestone in VW’s efforts to draw a line under the affair, which was uncovered by US regulators in 2015 and became the worst crisis in the company’s history.

VW confirmed the arrest of Mr Schmidt, who was head of the company’s engineering and environmental office in the US from 2014 to early 2015, but would not comment further.

The arrest was first reported by the New York Times, which said he faces charges of conspiracy to defraud the US and that he would arraigned in Detroit on Monday. Mr Schmidt and the FBI could not be immediately reached for comment.

VW admitted in September 2015 that it installed software in up to 11 million diesel cars worldwide that understated emissions of nitrogen oxides in official laboratory tests.

In March 2014, a study by the nonprofit International Council on Clean Transportation first highlighted how NOx emissions by some VW diesel vehicles on the road were up to 35 times higher than levels permitted under US standards.

Civil lawsuits filed last year by various US states alleged that VW’s compliance team reacted to the 2014 study by pursuing “a strategy to disclose as little as possible” about the cheating software.

The attorneys general of New York and Maryland accused Mr Schmidt of playing an “important role” in efforts to conceal from US regulators the true reason for VW diesel cars’ “unlawfully high real world NOx emissions first detected in spring 2014”.

In internal VW correspondence obtained by Bild am Sonntag, the German Sunday newspaper, Mr Schmidt relayed the concerns of regulators to other company executives.

In an email dated May 15 2014, for instance, Mr Schmidt wrote to Michael Horn, then head of VW in America, to mention possible risks and penalties associated with up to 600,000 diesel cars being in potential violation of the US Clean Air Act.

He listed penalty estimates per car of $37,500 from the Environmental Protection Agency and $5,500 from the California Air Resources Board.

Last June, in a partial civil settlement in the US, VW agreed to pay up to $15.3 billion. This could enable many diesel cars caught up in the scandal to be bought back by VW, as well as compensation paid to affected owners.

At the time, Mr Schmidt described himself as “running the office for group power train development”, and clarified that once issues with VW’s diesel software emerged he was asked to return to the company’s Wolfsburg headquarters and be “one of the main contacts for agencies worldwide”.

Last September, James Robert Liang, a VW engineer, became the first person to plead guilty to criminal charges in the affair, including conspiring to defraud US customers and regulators. He agreed to co-operate with prosecutors.