Volkswagen told it must face investor court case in US 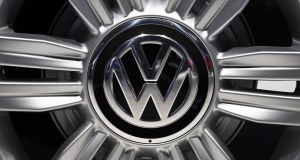 After more than a year of haggling, VW privately admitted to US regulators on September 3rd that it had cheated the tests, but it only publicly admitted the cheating on September 21st. Photograph: EPA

Volkswagen and its former chief executive Martin Winterkorn must face a US lawsuit brought by American investors who allege the company improperly inflated its share price by cheating on emissions tests, a judge in California has ruled.

The carmaker admitted in September 2015 to equipping up to 11 million cars worldwide with software allowing them to pass emissions tests even though they were polluting up to 40 times the permitted level of nitrogen-oxide in normal road conditions.

The investors allege that VW committed securities fraud both through the cheating and by failing to tell investors much earlier that it was in talks with US regulators over irregularities spotted between road tests and lab tests.

After more than a year of haggling, VW privately admitted to US regulators on September 3rd that it had cheated the tests, but it only publicly admitted the cheating on September 21st, days after the Environmental Protection Agency revealed it.

Following the EPA announcement, VW shares fell more than 25 per cent. Investors hope to recoup some of their losses – which in the US amount to “many hundreds of millions of dollars”, according to plaintiffs – potentially raising the cost of the scandal beyond the €18.2 billion that the carmaker has already set aside.

However, US district judge Charles Breyer ruled that the US “has an interest in protecting domestic investors against securities fraud”.

Stuart Pearson, auto analyst at Exane BNP Paribas, said the US court’s decision to hear the case was “not hugely” surprising, but it would be a modest negative for the stock “as the probability of losing in the US is likely higher than in Germany”.

Judge Breyer also rejected efforts by Mr Winterkorn and VW brand head Herbert Diess to dismiss the cases against them personally. He said they had failed to present a “compelling case” that a US court hearing the case would be unreasonable.

Mr Winterkorn stepped down within days of revealing the scandal, saying he was “shocked” and “stunned” by the cheating, but declaring that he was “not aware of any wrongdoing on my part”.

Mr Giuffra also acknowledged that Mr Winterkorn had predicted in a November 2014 document that the “diesel issue” would cost VW just €20 million, an amount that would be too small to require disclosure to shareholders as VW brings in more than €200 billion in revenue. Even in the summer of 2015, VW was projecting a fine “in a two-digit or lower three-digit million” range.

“Not particularly good,” Mr Giuffra replied, but added that they did not amount to securities fraud. – Copyright The Financial Times Limited 2017