Detroit Motor Show: VW’s Microbus could be on sale by 2020 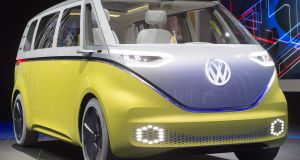 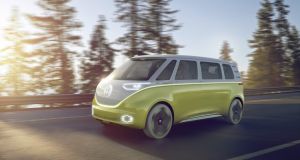 While VW has come close to producing a retro-styled replacement for the classic Type 2 Microbus twice in the past two decades, and baulked both times, there is distinct hope that this ID Buzz electric concept, as shown at the Detroit motor show, could finally reach dealerships.

VW is playing the nostalgia card for all its worth with this concept car. The styling is a very simple update of the original Type 2, right down to the deep “V” shape in the centre of the front, which is now being used to replicate the effect of a smiley face. It couldn’t be more hippy if it tried.

Klaus Bischoff, Volkswagen head of design, told the show “the ID Buzz is not a retro design on 22-inch wheels; rather we have taken the logical next step forward in development using what is in all likelihood the most successful design of its kind in the world”.

“The entire design is extremely clean with its homogeneous surfaces and monolithic silhouette. The future and origins of Volkswagen design DNA combine here to create a new icon.”

Oliver Stefani, head of Volkswagen exterior design, says: “The best example of the interplay of familiar and new elements is the front end with its characteristic ‘V’ and likeable ‘face’– it’s clearly a Microbus, but a completely new interpretation.

“Instead of the round headlights used in the original model, in designing the ID Buzz we opted for slender LED systems, which not only turn night into day, but also interactively communicate with other road users and pedestrians.”

Underneath the ID Buzz uses the same MEB electric platform as the ID hatchback concept seen at least year’s Paris motor show. In the Buzz it’s set up with two motors for four-wheel drive, with 369hp and a claimed one-charge range of 600km. VW says that the batteries can charge to 80 per cent capacity in 30 minutes from a 150kW charge point, and that a simpler 268hp rear-wheel drive version could also easily be built from the same basic package.

Inside, the cabin is floored with silver birch wood, but the rest is resolutely high tech. To call the steering wheel a steering wheel is to rather insult it – it’s a high tech touch pad with a leather rim, taking care of most of the driving functions, from gear selection to activating the autonomous mode. When you do that the steering wheel (insulting, I know) retracts back into the dashboard – “merges with it”, VW says – and the driver can swing their seat around 180 degrees to face the rear and chat with passengers, something we suspect could give some of those passengers a dose of the vapours at first.

The big question is, will VW build it?

Retro-styled van fans were disappointed when neither the 2001 Microbus concept nor the 2013 Bulli concept ever got further than the motor show stand, but the VW board is known to be very keen on the ID Buzz concept, and the company can clearly see the “instant icon” benefit of having a car such as this at the head of its new fleet of electric vehicles.

Matt Cooper: ‘I didn’t desire to have a big family, it just sort of happened’
6