Volkswagen to consider multi-suppliers after wrangle with Prevent hits production 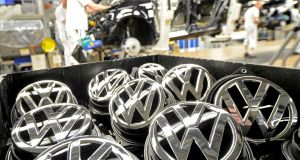 Volkswagen chief executive Matthias Müller has said he will review the German car giant’s procurement strategy to avoid a repetition of the crippling supplier dispute that hit production at six plants this month.

VW will re-examine contracts that leave the group dependent on a single supplier after the dangers were highlighted by its damaging wrangle with Bosnian parts maker Prevent, Mr Müller said.

“We will of course look into questions such as multi-sourcing, single-sourcing,” he told reporters late on Monday. “We will look at our procurement contracts and try to optimise matters with all suppliers.”

Carmakers generally seek to avoid over-dependence on any one supplier and seek to duplicate critical relationships even at slightly higher unit costs.

VW’s relationship with Prevent soured after it commissioned Car Trim to develop new seat covers for high-end models including Porsches and then cancelled the €500 million deal in the aftermath of the diesel scandal, refusing to cover the €58 million its supplier had already invested.

Parent company Prevent retaliated by moving some of Car Trim‘s financial claims against VW to Automobilguss, sole supplier of a key gearbox casing for VW’s top-selling Golf compact, said two sources with knowledge of the matter.

Separately, Volkswagen decided against suing South Korea over its decision last month to suspend sales of most of its models and a fine of 17.8 billion won (€14.35m) on the German carmaker.

Instead, Volkswagen will try to achieve certification for the affected models and resume sales quickly rather than taking on a lengthy legal process, a spokesman for Volkswagen’s South Korean unit said.