Volkswagen agrees to compensate tens of thousands of German motorists 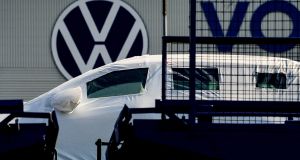 Volkswagen has agreed to compensate tends of thousands of German drivers after a court found against the company and its “immoral, malicious” manipulation of diesel engines. Photograph: Filip Singer/EPA

Volkswagen has agreed to compensate tens of thousands of German drivers after a court found against the company and its “immoral, malicious” manipulation of diesel engines.

Monday’s ruling by the federal administrative court in Leipzig opens the door to at least 60,000 claims in Germany, where lower courts found against VW but were waiting for guidance from the court in Leipzig before awarding compensation.

In its ruling, the federal administrative court said that VW, with its use of software to throttle noxious emissions only in test situations, had adopted a targeted strategy of deception that “qualifies as malicious and immoral”, according to court president Stephan Seiters.

Immediately after the final ruling, VW said it would pursue “pragmatic and simple solutions” with affected customers to spare them the cost and effort of suing the Wolfsburg company.

The test case was taken by Herbert Gilbert from the southwestern state of Rhineland-Palatinate, who sought the refund of the purchase price of €31,000 he paid for a VW Sharan minivan. Volkswagen disputed he had suffered any damage as a customer and was entitled to compensation.

A regional court found in Mr Gilbert’s favour for compensation for the full cost of the vehicle – minus depreciation for mileage – a ruling confirmed by the Leipzig court on Monday.

Based on the lower court ruling, this means Mr Gilbert can expect a payout of €25,616 in exchange for the vehicle. VW said that levels of compensation for other customers would “depend on the individual case”.

It is the latest defeat for the German car giant, five years after its cheat software was discovered by the US federal environmental agency. The illegal software ramped up filtering of noxious nitrogen dioxide if it detected a vehicle’s wheels – but not the steering wheel – in motion, indicating a test situation. In regular street traffic, the filters were switched off, making VW diesel emissions far dirtier than emissions rules permitted.

In total, it has paid out more than €30 billion in fines, compensation and buyback schemes worldwide in the last five years.

Monday’s ruling has no impact on another ongoing case into whether VW, with its diesel defeat devices, defrauded investors.