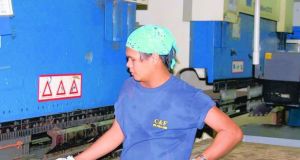 The number of staff employed by the company was 573, which was a significant reduction on the 944 in 2018.

Operating profit at Galway manufacturing group C&F Tooling more than tripled last year, while the fallout from the coronavirus pandemic has been less than initially feared by the company.

According to its latest company accounts, which cover the year ended December 31st, 2019, operating profit was €5.1 million compared with €1.5 million the previous year.

The group, which is controlled by John and Christina Flaherty, designs and manufactures machine parts, components, and general tools. It was founded in 1988 and has operations in Ireland, Czech Republic, and the Philippines.

Despite the pandemic, otherwise known as Covid-19, the company said the outlook for 2020 “remains very positive”. Before the Covid-19 pandemic, group turnover was forecast to grow by 14 per cent.

“While the Covid-19 pandemic presents many risks for the group, the effects of which cannot be fully quantified, the board is confident the year ahead will be a successful one for the group,” it said.

“While the effect of Covid-19 pandemic presents many risks for the group, its impact has been significantly less than first feared. The group continues to trade as part of the critical supply chain for essential products.

“Covid-19 has inevitably had a negative effect on trading activity. However, all staff have been retained and the group expects to trade without interruption.

“The parent company qualifies for and is participating in the Government’s temporary wage subsidy scheme and it has also arranged a significant additional working capital facility from its banks.”

C&F Tooling reported earnings before interest, taxes, depreciation, and amortisation of €7.2 million compared with €7.7 million in the previous year.

The improvement in profitability was reflected in the increase in cash reserves of €1.6 million to €2.2 million with corresponding improvements in all key balance sheet performance indicators.

The company’s wind energy division was closed down in 2019. It was decided the small wind business was no longer sustainable due to a number of factors and the group decided it could no longer continue to fund it.

As a result of that decision, and also the sale of the automotive division in the previous year, turnover dropped from €77 million in 2018 to €49 million.

The number of staff employed by the company was 573, which was a significant reduction on the 944 employees in 2018. Costs associated with remuneration of staff fell from €24.5 million to €13.4 million.