US authorities to publish report on Bombardier Aerospace inquiry 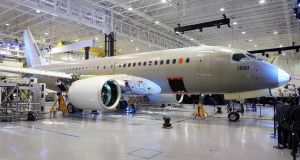 A thousand workers, or about 25 per cent of Bombardier’s workforce in the North, are employed on C Series production, according to the trade union Unite. Photograph: Patrick Doyle/Bloomberg

The United States department of commerce is preparing to publish a preliminary report on its investigation into Bombardier Aerospace which could have major repercussions for thousands of jobs in the North.

The department launched an investigation last May into allegations levelled against Bombardier by its rival Boeing that the Canadian group was selling its C Series aircraft in the US below the cost of production.

But the department has continued to pursue a wide-ranging investigation vigorously, in particular examining the “market-distorting effects caused by injurious dumping and unfair subsidisation of imports” into the US.

It has also examined whether Bombardier received “financial assistance from a foreign government that benefits the production of goods from foreign companies and is limited to specific enterprises or industries”.

The department was initially due to publish its first findings on its Bombardier investigation in July but, following a request from Boeing, this was delayed until Monday.

It is now expected that the department may not make its decision public until Tuesday.

Bombardier has made no secret of its position that Boeing’s claims “threaten thousands of aerospace jobs around the world”.

This has alarmed political leaders in Canada and the UK who have threatened to reconsider future trade deals with Boeing in their regions.

In recent weeks British prime minister Theresa May and political leaders in the North have also personally appealed to US president Donald Trump and vice-president Mike Pence to help safeguard aerospace jobs in the North.

According to the trade union Unite, 1,000 workers, or about 25 per cent of Bombardier’s workforce in the North, are employed on C Series production, but if sales perform as forecast this could rise to 60 per cent of jobs in four years’ time.