Change of ownership to lead to ‘signficant investment’ in the manufacturer 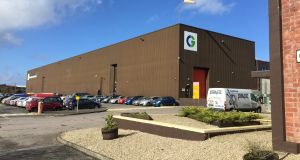 CG Power Systems has been in Cavan since 1977

State-backed MML Capital Partners has taken a controlling stake in CG Power Systems, in a move in which it said has led 400 jobs being saved in Cavan.

No financial details of the transaction have been disclosed although MML typically invests between €5 million and €15 million in companies in which it acquires a stake. Industry experts said MML was likely to have paid at the upper end of this range given the size of the business.

The deal sees MML becoming the largest single equity holder in CG Power along with its current management team.

The company, which makes distribution transformers for utilities such as ESB Networks, was formerly part of the Avantha Group. It is being acquired from liquidators who were appointed to its direct parent CG Power Systems Belgium, following difficulties in the wider group.

It is expected that the change of ownership will facilitate “significant investment” in CG, which has a 17,000 sq m plant in Cavan. The company has been manufacturing in the town since 1977, having been first established by Pauwels Trafo of Belgium.

The company, which has been expanding into continental Europe in recent years, reported revenues of about €70 million for the year to the end of March.

The new investment is being made by MML Growth Capital Partners Ireland, a growth fund supported by the Ireland Strategic Investment Fund (ISIF), AIB and a number of international institutional investors.

“We’re delighted to receive this backing from MML”, said Stephanie Leonard, managing director, CG Power Ireland. “First and foremost, it provides the business with stability, following a period of uncertainty with difficulties in the Avantha / CG Group. It gives the business a strong institutional backer, providing security to our dedicated team and confidence to our valued employees, customers and supplier base.