Move will bolster its position in one of the world’s biggest skincare markets. 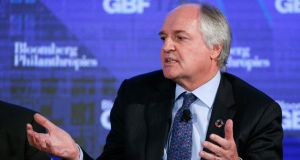 Unilever has agreed to buy a South Korean cosmetics maker for €2.27 billion ($2.7 billion) from shareholders including Goldman Sachs Group and Bain Capital, bolstering its position in one of the world’s biggest skincare markets.

Unilever will buy Carver Korea, maker of AHC skincare products, the London- and Amsterdam-based company said in a statement on Monday. The company had sales of 321 million euros last year.

For the Anglo-Dutch consumer-goods giant, whose brands include Ben and Jerry’s ice cream and Dove soap, the acquisition marks a shift from other recent purchases in niche areas like organic tea and vegan mayonnaise as chief executive oficer Paul Polman pursues a commitment to sustainability.

The company has also been building up a “prestige” arm within its personal care business, targeting high-end brands founded in developed markets, such as Dermalogica, Ren and Murad.

South Korea is the fourth-largest skincare market in the world and interest in the Asian country’s cosmetics companies has been heating up recently. Bain Capital in April agreed to invest about $816 million in beauty-products maker Hugel Inc. AHC’s products include moisturizers, toners and sun protection.

South Korean cosmetics companies had robust growth in past years, helped by strong Chinese demand, which has weakened recently amid geopolitical disputes in the region.

Goldman and Bain bought an 80 percent stake in Carver for 430 billion won ($380 million) last year, when the company had earnings before interest, taxes, depreciation and amortization of 137 million euros.

Last week Unilever agreed to a $900 million asset swap with South African investment company Remgro Ltd. to reorganise its business in that country. Unilever has said investors should expect it to spend between 1 billion euros and 3 billion euros on takeovers every 12 months to accelerate its push beyond mainstream products and into healthier or ethically sourced brands.