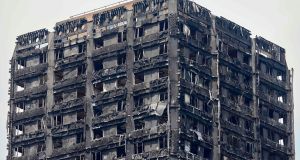 The charred remains of clading are pictured on the outer walls of the burnt-out shell of the Grenfell Tower block in north Kensington. Photograph: Niklas Halle’n/ AFP/Getty

Insulation manufacturer Kingspan has begun disciplinary procedures and investigations of some current and former staff arising from the Grenfell Tower inquiry in Britain, it has emerged.

Witnesses who worked for Kingspan’s insulation boards business at the time some of the company’s products were used on the London tower block have been giving evidence to an inquiry into the causes of a fire there that killed 72 people in 2017.

It is understood that disciplinary procedures and investigations are ongoing into some current and former Kingspan staff arising from the inquiry. However, the group, with its headquarters in Cavan, said on Tuesday that it did not comment on individual employees.

The inquiry heard earlier this week that Philip Health, a technical manager with the insulation boards division until December 2009, said a builder who questioned the safety of the company’s Kooltherm K15 product should “go f**k themselves”.

Mr Heath apologised for the remarks, made in an email to colleagues, describing them as totally unprofessional. He denied that they reflected a culture within Kingspan at the time.

Kingspan said on Tuesday that it “condemns unreservedly any actions that do not demonstrate a proper commitment to fire safety”.

Mr Heath is not employed at group level in Kingspan. He now works in business development for a UK subsidiary, focusing mainly on identifying new customers and possible acquisitions for the business.

Quantities of Kingspan’s K15 were used on Grenfell Tower, although much of the insulation on the building was made by a rival, Celotex.

K15 was used in conjunction with aluminium composite material, which had a core made from polyethylene, that lined the outside of the tower. Kingspan maintains that it never recommended using its product with this cladding.

It maintains that subsequent large-scale tests show that any cladding system using the aluminium composite material installed on the tower would have been unsafe, irrespective of the insulation used.

It also points out that the first phase of the inquiry found that the flames spread rapidly through the building because of the presence of the aluminium composite material. The group says it did not know that K15 was used on Grenfell Tower.

However, the inquiry has argued that a former senior figure at its UK operation was involved in marketing K15 without solid testing evidence.

Kingspan has acknowledged that it found shortcomings in tests of cladding systems undertaken in 2005 and 2014, and that it relied on the results of those tests when marketing K15.

“These shortcomings fell short of the high standards which Kingspan sets itself,” the group says.

The group says it has since tested and re-tested K15 to ensure that it is now validated for British Standard 8414, which regulates the fire performance of external cladding.

Former technical director Malcolm Rochefort told the inquiry on Tuesday that Kingspan modified the way K15 was made in 2006, using technology developed by a Dutch company, Marec, which it had bought three years earlier.

“Although Kingspan Insulation is confident that K15 was, and is, safe for use within compliant cladding systems, these historical shortcomings should not have happened and we offer a full and sincere apology for them, and an assurance that we have made substantial changes to ensure they cannot be repeated,” the Irish group said.