Pushchair maker Bugaboo up for sale after founders throw tantrum 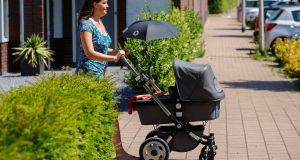 Founded in 1999, Bugaboo’s breakthrough came after one of its strollers was shown on in an episode of hit TV series Sex and The City in 2002, when the character Miranda had a baby

Bugaboo, the Dutch company that transformed the market for high-end baby buggies after one of its prams featured on TV show Sex and the City, is up for sale in a deal that could fetch €200 million following a row between its co-owners, people familiar with the matter said.

Businessman Eduard Zanen, who provided seed capital for the company, had become frustrated after co-founder and inventor Max Barenbrug continued to influence strategic direction after agreeing to a design role. Mr Zanen invoked a 2012 agreement that either could trigger the sale of the company to a third party.

That disagreement was settled without a ruling, a spokeswoman for the Amsterdam District Court said. But Het Financieele Dagblad first reported on Thursday that the partners have now agreed to a sale. Mr Zanen and Mr Barenbrug’s sister divorced a decade earlier, the paper said.

Founded in 1999, Bugaboo’s breakthrough came after one of its strollers was shown on in an episode of hit TV series Sex and The City in 2002, when the character Miranda had a baby.

The pushchairs, which can cost over €900, have been snapped up by celebrities including Gwynneth Paltrow, Victoria Beckham, and Elton John.

Designers Viktor & Rolf, Bas Kosters and the Andy Warhol Foundation, among others, have crafted limited edition designs, and the company recently made a foray into luggage.

The company made a pretax profit of €16.8 million on sales of €95 million in 2015, according to its most recent filing with the Dutch Chamber of Commerce.

Jelena Sokolova, analyst at Morningstar, said Bugaboo could be valued against luggage makers Samsonite and Rimowa, recently acquired by LVMH, which both trade at two- times sales.

Rabobank, which has been given the commission to sell the company, will approach both strategic and private equity buyers for Bugaboo.

“Selling is the wisest decision in a situation like this: when the owners start to fight, that can be the beginning of the end for a lifestyle brand,” said Dutch marketing specialist Paul Moers.

Mr Moers noted that while Bugaboo’s image of sturdy quality and versatility has spawned many imitators, its reputation is still solid and the market is fragmented.

“It’s not too late for Bugaboo, not by any means,” he said. “Find a buyer with knowledge of sales and marketing and the power to invest behind advertising and you can grab market share, become a much bigger player.”

Competitors and possible buyers for Bugaboo include Britax, owned by Nordic Capital, Stokke, owned by Korean investment firm MXMH, Quinny, owned by Canada’s Dorel Industries, Graco, owned by US firm Newell Brands, and LVMH, among others.

1 Second Covid-19 outbreak and no-deal Brexit an appalling vista
2 Ireland faces 'deep downturn' this year and may not rebound until 2024 if there is a second wave
3 System agreed for Irish goods to skip checks on UK trade
4 Interim examiner appointed to Compu b parent
5 How much do Irish people earn? And what will Covid-19 do to our wages?
6 Why are markets booming when a crash is on the way?
7 Supreme Court in Dublin clears Bernie Madoff Ponzi loss case for hearing
8 David McCullagh announced as co-host of RTÉ Six One News
9 John FitzGerald: Civil Service expertise key to Government policy
10 Datalex’s latest scary update offers glimmer of hope
Real news has value SUBSCRIBE