Trump, forklifts and an Irish company’s aim to crack US market 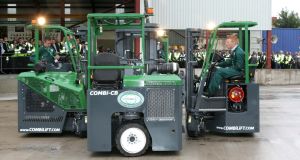 He may not be popular with some, but one Irish company is grateful for the economic confidence President Donald Trump has delivered to the US manufacturing sector and is looking to “make hay while the sun shines” on the back of it.

Speaking at the Irish Times Economic Summit on Tuesday, Martin McVicar, cofounder of forklift manufacturer Combilift, was keen to downplay talk of a shorter term than expected for the newly elected president.

“I hope it doesn’t happen for a few years yet,” he laughed.

The Monaghan-based company, which reported turnover of some €200 million last year, exports 98 per cent of its products, about 25 per cent of which goes to the US.

According to Mr McVicar, most of Combilift’s US-based customers are Trump supporters, and their renewed economic outlook is helping his business to boom, with the company’s US-based revenues up by 16 per cent.

Now Combilift is putting significant resources into capturing a greater share of the market.

“We hope to double our business in the US market over the next couple of years,” he said.

While proposals such as Trump’s 20 per cent border adjustment tax would be “a big concern” if pushed forward, Mr McVicar is upbeat on the outlook.

“ It’s a great opportunity,” he said.

The UK is Combilift’s other major market, accounting for a further 25 per cent of exports.

“We very much see it as our home market,” Mr McVicar said, adding that he expects opportunities to grow in the UK in the wake of Brexit and the potential introduction of tariffs, as continental European suppliers may see the UK as being “too much hassle”.

World Trade Organisation (WTO) tariffs suggest a duty of 4.5 per cent could be put on the export of forklifts, a rate which he, said, the company is “confident it can manage” provided it keeps innovating, which will allow it to charge a premium in the UK market.

Where the tariffs could impact however, is in new business start-ups. Mr McVicar is also involved in a fitness start-up, Ramfit, and he noted that this could face tariffs of 5-7 per cent when selling into the UK.

The company is also reconsidering where it sources raw materials. To hedge against currency fluctuation it started sourcing more in the UK; but if duties on components come in this could prove to be expensive. So, the company is now looking to source the inputs from mainland Europe.

Where he does have a concern is on employee mobility. Combilift has some 46 employees who live in Northern Ireland and travel across the Border each day to work in Monaghan, and Mr McVicar noted that while there has been a commitment to retaining free movement of people, will this mean free movement of employees?

“And where will they pay tax? And social security?” he asked.