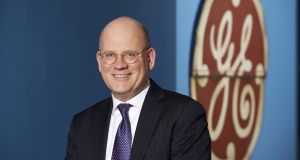 John Flannery’s appointment is the result of succession planning, the company said.

Mr Flannery, 55, will become chief executive on August 1st and will add the title of chairman on January 1st, the Boston-based company said in a statement on Monday. The appointment is the result of succession planning that has been under way since 2011, the company said.

He will be replaced in his healthcare role by Cork-born Kieran Murphy, a graduate of University College Dublin. Mr Murphy is currently president and chief executive of GE Healthcare Life Sciences, a $3.7 billion molecular medicines business.

CEO-designate Mr Flannery “has led complex financial and industrial businesses all over the world, including running GE Healthcare, GE in India and the business development team for GE through the successful acquisition of Alstom, ” said Jack Brennan, the company’s lead independent director.

The company’s move followed months of stepped-up pressure on Mr Immelt, 61, from activist investor Trian Fund Management over a slide in GE’s stock to the lowest level in a year and a half. The shares have fallen 12 per cent this year, compared with an 8.6 per cent gain for the Standard and Poor’s 500 Index.