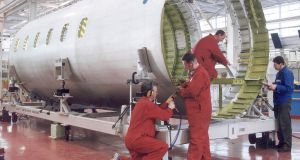 Bombardier currently has 4,500 employees in Belfast

Bombardier began discussions in 2015 to reduce costs at its Belfast facility by 20 per cent by 2017.

It had initially proposed a deal which included a three year wage agreement, reduced shift premiums, over time reduction and a one hour extension to its 36 hour working week.

It was overwhelming rejected by workers and follow up pay talks subsequently became overshadowed by a series of global redundancies by Bombardier which resulted in the loss of 1,080 jobs in Northern Ireland. There are currently approximately 4,500 still employed by the company.

Bombardier confirmed on Wednesday that its Belfast workforce had agreed to a new four year pay deal.

It is understood that this will include a 2 per cent wage increase which could potentially rise to 2.75 per cent.

But the Canadian group has warned that the pay deal does not signal that there may not be further turbulence ahead for its Northern Ireland operations.

“We still have significant challenges to address in terms of improving our competitiveness, but we will continue to work with our employees to protect the long-term future of our business,” the group stated.

Bombardier Aerospace had publicly voiced its support for the UK to remain part of the European Union in the run up to the UK/EU Referendum.

It said at the time: “Bombardier Belfast’s position is that the UK remaining within the EU is better for our aerospace business. Access to integrated European supply chains is critical to our business and the free movement of goods across Europe contributes significantly to our competitiveness”.

But union leaders in Belfast hope that the latest pay deal will “safeguard” jobs in the North.

Davy Thompson, regional co-ordinating officer for Unite said the workforce voted by a 73.5 per cent majority to accept the deal.

He said Belfast had not escaped the “unforeseen challenges” that Bombardier faced in getting its new C-series aircraft programme off the group.

The C-Series aircraft, with its Belfast-designed and produced wings, had been plagued with budget over-runs and delays.

Mr Thompson hopes that a new chapter is beginning for both Bombardier and its Belfast operations in 2017.

“Unite hopes that this deal will stabilise the businesses’ Belfast operations in the go-forward.

“We hope that this will provide a base from which we can secure additional employment, securing the long-term future of the company in Northern Ireland”, he added.

Separately Bombardier has also announced that Belfast born Michael Ryan, who was the vice president and general manager of Bombardier’s Northern Ireland operations has been promoted to president of Bombardier’s aerostructures and engineering services.

Mr Ryan, who joined Bombardier after it acquired Short Brothers in 1989, will continue to be chiefly based in Belfast and there will be no other changes to the group’s Northern Ireland management team.