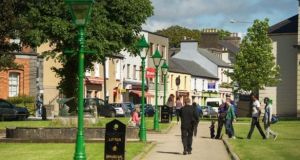 Castlebar, Co Mayo. The council has confirmed that Opensparkz will not be buying the property in the town, throwing a question mark over the job-creation plan

Plans to create more than 200 jobs in the west of Ireland are in doubt after the sale of a property earmarked for the project fell through.

Opensparkz, a company controlled by businessman Declan Conway, pledged to buy the old Volex factory in Castlebar from Mayo County Council in 2015 and create 250 jobs by using it as a base for sustainable business.

The council has confirmed that Opensparkz will not be buying the property, throwing a question mark over the job-creation plan.

Early last year, Texas-based Hungry Planet announced plans to use the factory to make specialised agricultural equipment and predicted that it would employ at least 200 people once its operation was up and running in 2018.

Brightbeam from Australia and a third business, Food 360, also signalled their interest in using the property.

Instead the council said that it was in talks with one of the “original partners” in the plan for the factory, and State agencies, about a “remodelled” project.

“These discussions are commercially sensitive and it will be a number of months before they are concluded,” the council said.

According to the Western People newspaper, Opensparkz pledged to pay €700,000 for the building and did put down a €100,000 deposit.

The council did not explain why the sale did not go through. The local authority paid €610,000 for the building, once used to make cables for the automotive industry, in 2014.

Independent councillor Michael Kilcoyne pointed out that the €700,000 sale had fallen through at a time when the council had cut municipal budgets by €500,000.

“The original project is not going to go ahead and we are being told that there are talks about another project that might go in there, and this is 2½ years after the jobs were announced,” he said.

Meanwhile, a representative of several investors in two of Mr Conway’s other companies, Pronanotect Holdings and Spearpoint, confirmed that they are waiting for cash due to them under the Business Expansion Scheme (BES).

Spearpoint and Pronanotect raised €1.6 million from BES backers in 2009 and 2010. The scheme required them to leave their money in the companies for five years before it could be redeemed.

In early 2015, after this time had elapsed, Mr Conway said: “We will be redeeming all BES shareholders.”

He pointed out that this process took time. Mr Conway did not respond to requests for a comment yesterday.

One of the companies’ backers said at least five investors were waiting for their cash to be returned.

Hungry Planet did not respond to several requests for a comment in relation to its plans for Castlebar.

Lucy Kellaway: Poolside working no longer a sign of importance 21:07
Project Eagle: What was it and why is it in the news? 20:13
Stocks decline on poor corporate earnings 17:44
AIB defends ‘incredibly’ high €1.2bn loans charge as 2008 haunts 17:31
Microsoft now looking to acquire TikTok’s entire global business 16:57
Search executive
jobs on irishtimes.com