Akzo Nobel in talks to merge paints business with Axalta 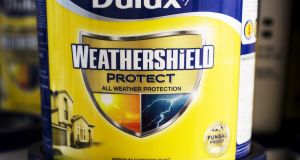 The Dutch company Akzo Nobel said on Monday that it was in talks to create a paints industry giant, just months after it repeatedly rebuffed takeover approaches from a US rival, PPG Industries. Akzo Nobel’s discussions to combine its paints business with another rival, Axalta Coating Systems, come with the Dutch company also planning to spin off its specialty chemicals business. Akzo Nobel – which counts Dulux paint among its brands – said those spin-off plans would be unaffected by the discussions with Axalta. The specialty chemicals business had €4.8 billion in revenue last year.

Akzo Nobel, with a market value of about €18.9 billion, is much larger than Axalta, at €7 billion. Spinning off the specialty chemicals business, however, would probably make the two companies closer in size. Akzo Nobel and Axalta said the deal would be a so-called merger of equals.

Axalta, based in Philadelphia, makes car paints and coatings for car parts. The company reported net sales of $4.1 billion (€3.5 billion) last year and employs about 13,000 people. The Carlyle Group, an investment firm, acquired Axalta from DuPont for $4.9 billion in 2012 and publicly listed the company the next year.