Bombardier and Schlumberger cut total of 500 jobs in North 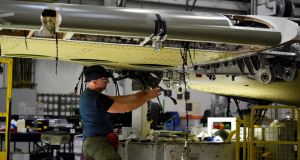 Bombardier is to axe a further 280 jobs at its Northern Ireland operations as union leaders warn the “threat” to its Belfast site has not disappeared despite its new partnership with Airbus announced last week.

As Bombardier’s Belfast workforce faces the prospect of yet another round of savage job cuts, staff at another major manufacturer in the North were dealt an equally devastating blow when the oilfield services group Schlumberger told staff first thing on Thursday morning that it intended to close its Newtownabbey plant with the loss of 220 jobs next year.

Union leaders have warned the North’s economy cannot continue to sustain major manufacturing job losses and the impact of 500 redundancies in one strike will pummel local communities.

In a statement, the group said it was continuing to review “manpower requirements” in Belfast and regretted it “must reduce our workforce levels by around 280”.

“Those impacted will be functional support personnel, including managers and professional staff,” Bombardier added.

But union leaders believe the move to reduce its workforce again in the North is “premature” and devastating for the workers impacted and their families in the run-up to the end of the year.

Davy Thompson, Unite regional co-ordinating officer, said the latest planned redundancies underline its concerns that the Airbus deal with Bombardier, which gives Airbus a majority stake in the C-Series aircraft programme, has not delivered any long-term security for its Northern Ireland workforce.

“This news is all the more concerning as it comes despite management pronouncement that the Airbus acquisition of a 50.01 per cent stake in the C-Series programme might result in a potential doubling of production on site.

“Unite has highlighted the fact that Airbus paid nothing for this stake and that it will only come into effect in the second half of 2018, means that the deal, while providing some hope for the C Series in the future, has made little to no impact on the financial pressures faced by the company in the present,” Mr Thompson said.

He said Unite is appealing to Bombardier management to review the decision because of the potential for additional jobs in Belfast in relation to the C-Series and also what he described as opportunities for additional employment on site with existing legacy products.

“At a time when the unions and the broader Bombardier workforce in Northern Ireland are leading efforts to put the pressure on political leaders to use their leverage on Boeing and the US administration to rescind the 300 per cent tariffs threatened on the C-Series, it is very saddening that our efforts are rewarded by this announcement,” Mr Thompson added.

Meanwhile, an influential House of Commons committee in London also announced on Thursday that it would launch an inquiry into Bombardier in relation to its Northern Ireland operations.

The chair of the Northern Ireland Affairs Committee, Dr Andrew Murrison, said: “Reports of a deal between Bombardier and Airbus have lifted the heavy gloom that hung over one of Northern Ireland’s major providers of high-tech, high-quality jobs.

“It is great news. However, the potential impact of tariffs remains unclear. Given the huge importance of Bombardier in the Northern Ireland economy, it is right that we use this time to assess where we are with it, how its position can be strengthened further and the wider impact on the region should job losses occur.”

But while concerns remain over Bombardier’s long-term future in the North, Schlumberger’s decision to close its Newtownabbey site and axe 220 jobs has been described as a separate hammer blow for the North’s manufacturing sector. Schlumberger has blamed the continuing downturn in the oil and gas sector as the key reason for its decision to close its Northern Ireland plant next year. The company said it intended to support its employees through the process and may be able to transfer some workers to other locations.