The construction and mining equipment firm employs 1,600 in the North, and makes generators at its factory in Larne 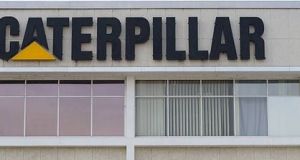 Caterpillar says the majority of the proposed redundancies are in production, support and management roles at its plant in Larne, Co Antrim, and are expected to be complete within 12 to 18 months. Photograph: Getty Images

US manufacturing firm Caterpillar has announced plans to cut up to 700 jobs in Northern Ireland.

The job losses are due to global restructuring and the relocation of some business to other parts of the world.

The company said the majority of the proposed redundancies were in production, support and management roles at its plant in Larne, Co Antrim, and are expected to be complete within 12 to 18 months.

The construction and mining equipment firm currently employs about 1,600 people in the North. It makes generators in the factory in Larne, and also has two premises in Belfast.

The trade union Unite on Thursday called on the North’s Executive to take action to protect jobs and the manufacturing industry.

Unite regional officer George Brash said the announcement was a “severe blow” to the manufacturing sector and the wider economy in the North.

“This is a scandalous decision geared only to increase further the company’s corporate profits,” he said, adding that his understanding was that much of the lost production was to be outsourced to India.

The union, he said, would “fight to defend these jobs and the important skill base they represent”.

The vice-president of Caterpillar’s electric power division, Joe Creed, said the firm recognised this was “difficult for our employees, their families and the community”.

“We do not take these contemplations lightly; however, we must plan for future business needs to be competitive.”

The North’s First Minister, Arlene Foster, described the announcement as “devastating” for workers and their families and for the , and pledged that the Northern Ireland Executive would examine how it might provide assistance.

“Caterpillar have always been a very good company to work with; we’ll continue to work with Caterpillar. There is a need for us to absolutely engage and see what it is that we can do to help.”

The Minister for the Economy, Diane Dodds, said the potential job losses were due to a decision made by Caterpillar at corporate level, and were “not directly related to Brexit or Covid-19”.

She said the company had “clearly stated their announcement is not a closure announcement”, and Invest NI would work with Caterpillar “to mitigate potential impact on the Northern Ireland operation”.

A 90-day consultation period will now take place, during which Caterpillar said it was “committed to ongoing communication with employees to provide more information on the proposed changes” .

Caterpillar said it was also considering the sale of its offices in Springvale Business Park in Belfast, and the remaining employees would be relocated to Larne.