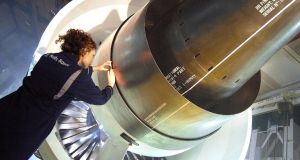 Britain owns a golden share in Rolls-Royce, and the importance of the company to the UK’s military capability and its economy in terms of exports has fuelled talk of a possible government rescue. Photograph: Rolls-Royce/PA

Rolls-Royce shares hit 16-year lows on Monday after the engine-maker confirmed it was considering a rights issue of up to £2.5 billion (€2.72bn) following months of speculation about its finances.

The company, which makes engines for aircraft, military jets and ships, put out a statement on Saturday in response to media reports. Rolls-Royce said that no decisions have yet been taken about the precise amount to be raised or by what means.

Analysts say that Rolls-Royce’s balance sheet is not in need of immediate funding.

The stock was down 11 per cent at 160 pence in late Monday afternoon trading.

They have shed three-quarters of their value this year, and a tumble in recent weeks could make it even tougher to raise as much as £2.5 billion from selling new shares.

The Covid-19 pandemic has hit Rolls-Royce hard as airlines pay the company according to how many hours its engines fly.

Yet given the low share price, Agency Partners analyst Nick Cunningham said raising new equity would be a last resort.

Rolls-Royce in August said it wanted to sell turbine blade-maker ITP Aero and other assets to raise at least £2 billion. On Saturday it said it was also looking at equity or debt issuance.

Two senior industry executives who deal with Rolls-Royce said they believed a renationalisation or injection of state capital was possible, but that it was unclear whether the UK had an appetite for such a move. Rolls was nationalised in 1971 and later privatised.

Britain owns a golden share in Rolls-Royce, and the importance of the company to the UK’s military capability and its economy in terms of exports has fuelled talk of a possible government rescue.

Plane-makers Boeing and Airbus are increasingly concerned about the plight of the company, according to several sources.

In July, Morgan Stanley analysts warned that a second wave of Covid-19 infections could necessitate a government bailout.

The Financial Times reported that Rolls-Royce is in discussions with sovereign wealth funds, including Singapore’s, to help underpin any fundraising efforts, but UK consent may be needed under rules which limit foreign ownership of the company. – Reuters