Boeing gets US go-ahead to test 737 Max 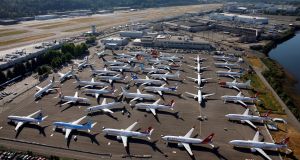 Boeing has received US Federal Aviation Administration approval to start test flights of its 737 Max to demonstrate that it can fly safely with new flight control software.

The flights, which could begin as soon as Monday, represent a major step in the company’s effort to get its bestselling plane flying again.

The Max was grounded in March 2019 after a pair of fatal crashes – in Indonesia and Ethiopia – that killed 346 people. The resulting crisis cost Boeing billions of dollars, including compensation paid to victims and airlines. It also led to the departure of the company’s chief executive, set off government inquiries and raised questions about the rushed effort to build and approve the Max.

The certification flights, conducted by FAA pilots, will probably take place in the Seattle area, where the plane is made. A top Boeing test pilot will also be on the flights.

“Testing is expected to take several days, and will include a wide array of flight maneuvers and emergency procedures to enable the agency to assess whether the changes meet FAA certification standards,” the agency said.

If the flights are successful, it could still be months before the planes are deemed ready to fly again. If the FAA identifies further problems, Boeing may need to make additional changes.

The crashes were caused in part by anti-stall software on the Max, known as MCAS, which automatically pushed the nose of the planes downward. Boeing developed a fix for the software, though regulators have identified other problems since.

FAA officials will spend a week or more preparing a report detailing their findings from the flights. Once that is complete, Boeing will submit a package of materials to the agency that will include details of the new software and how it was designed and tested.

The FAA – as well as an outside group of experts – will then review that submission, a process that could take weeks longer. The agency, working with international counterparts, will also determine what, if any, new training it will require for pilots.

The agency can then issue orders to install the software update and allow the Max to fly again.

Even then, it will be weeks, or perhaps more than a month, before airlines can fly the Max again. – New York Times