Airbus falls on report of US justice corruption probe 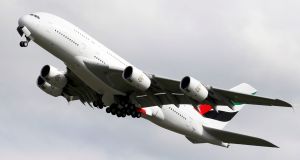 Le Monde newspaper has reported that Airbus was told at the end of the summer about the investigation by the US department of justice. File photograph: Regis Duvignau/Reuters

Shares in Airbus, the European aerospace and defence group, fell more than 6 per cent on Thursday morning following a report in France’s Le Monde newspaper that the US department of justice had officially opened an investigation into alleged corruption.

Le Monde reported that Airbus was informed at the end of the summer about the investigation by the DoJ, adding to ongoing inquiries by Britain’s Serious Fraud Office and France’s Parquet National Financier into the alleged use of agents internationally.

A spokesperson for Airbus declined to comment on the potential investigation but said: “Consistent with the company’s prior public disclosures, Airbus continues to co-operate with all relevant authorities, including the US department of justice, both in connection with Airbus’ findings concerning certain inaccuracies in filings made with the US department of state . . . and in connection with conduct forming part of the SFO/PNF investigation that could fall within US jurisdiction”.

The aerospace group, which is in the midst of a top-level revamp, has been dogged by a series of investigations into the use of middlemen to secure orders. Tom Enders, Airbus long-serving chief executive, is due to retire from the group at the end of April.

Airbus said in February this year that American authorities had asked for information to assess whether any of the alleged misconduct in the European investigations could fall within US jurisdiction.

The company on Thursday stressed that the US was “of major importance to Airbus in terms of production facilities, employees and clients”. – Copyright The Financial Times Limited 2018