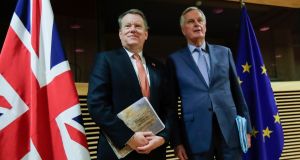 Brexit should create as little an extra burden as possible for European aerospace and defence businesses, the indsutry has warned EU negotiator Michel Barnier and his UK counterpart David Frost.

Eric Trapper, president of the Aerospace and Defence Industries Association of Europe, which represents aircraft manufacturers and maintenance specialists, warns in a letter to both representatives that Brexit will put these businesses under enormous pressure.

“What we need are Brexit solutions that cause as little additional burden as possible in order to avoid permanently damaging the already hard-hit aerospace and defence industry ,” he says.

Mr Trapper urges both sides to reach agreement before the transition period runs out at the end of this year.

“In case of no deal, it would therefore be critical to re-apply temporary measures in similar terms to the ones envisaged or adopted in 2019 to protect, in particular, air transport, some airworthiness certificates, road haulage and movement of workers,” he concludes.

Corporate insolvencies, ‘Darth Vader’ masks and Covid-related financial complaints 07:32
Asian markets calm as Sino-US tensions flare up 06:43
German companies expect further 8.5 months of pandemic restrictions 06:36
Welltel acquires Intellicom in €5.5m deal 05:40
‘It’s not about beating the life out of a price for the sake of it’ 05:30
Search executive
jobs on irishtimes.com