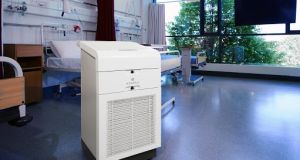 The new investment comes after the company said recently that it had seen a huge jump in business on the back of the coronavirus pandemic.

Wellair, which sells its products under the Novaerus and Plasma-Air brand names, is based at DCU Alpha, although it mainly operates out of the US. It was founded in 2012 and employs about 45 people.

Led by Kevin Maughan, who went on to co-found energy-saving lighting specialist UrbanVolt, Wellair develops portable air-disinfection units for use in healthcare and other settings.

It protects patients against a range of illnesses including MRSA, clostridium difficile, norovirus and influenza.

The latest financing means the company has raised over $30 million to date. F-Prime Capital, which is part of Fidelity Investments, led the funding round. Other companies in its portfolio include Chinese e-commerce giant Alibaba and Dublin-headquartered Curam Software, which was acquired by IBM in late 2011 for more than $100 million.

Wellair’s other investors include Polaris Partners, the US investment firm led by Noel Ruane, that has also backed Pointy and Voysis, both of which were sold earlier this year to Google and Apple respectively.

The air purification company secured $4 million from F-Prime last year in the form of convertible debt that was subsequently converted to equity.

F-Prime also led a $16 million funding round for Wellair in 2016 and participated in a $10 million investment in 2014 when it was known as Fidelity Biosciences.