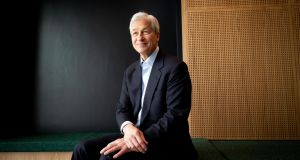 JP Morgan CEO Jamie Dimon says the company may have to move a ‘raft’ of jobs out of London. Photograph: Tom Honana.

JP Morgan chief executive Jamie Dimon sees the US banking giant being forced to gradually move a raft of jobs from the UK to elsewhere in Europe in the coming years, even as it gets away with a lower-than-expected initial movement of few hundred” out of London to prepare for Brexit, writes Joe Brennan. You can read the full interview with Jamie Dimon here.

Dublin airport is about to launch a major tender process including two separate contracts, one of which will comprise 21 food and beverage outlets in a deal forecast to have revenues of about €350 million, writes Peter Hamilton

Aircraft lessors in the Republic are unlikely to immediately feel the pinch from the decision to ground the global fleet of Boeing 737 Max 8s, industry sources have suggested. Peter Hamilton reports.

Irish waste-to-energy company BHSL has agreed a new €1.5 million deal to sell its technology for use in France. It has also confirmed it is close to completing a funding round to raise €10 million. Charlie Taylor reports.

Uncertainty stalks the global motor industry, writes Motoring Editor Michael McAleer. Sales are falling and the most are unsure about electric cars despite all the bluster.

Our Friday World of work stories tell us how to deal with the stress of business travel.

In his weekly column John FitzGerald looks at how the UK’s proposed ‘honesty box’ approach to post-Brexit trade raises problems.

Caveat marvels at the networking and branding opportunities derived from St Patrick’s Daywhich are the envy of the world.

Brexit Proof meets Thomas and James Keogh of Rathwood home and garden centre in Carlow on how their Brexit preparations have gone.