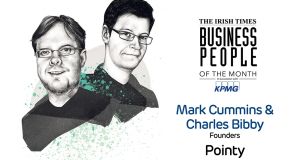 Mark Cummins and Charles Bibby, the founders of Irish technology company Pointy, have been chosen as The Irish Times Business People of the Month for January, an award run in association with KPMG.

Google paid a reported $160 million (€145 million) last month in a deal that netted a huge windfall for the founders. Cummins will receive a $42 million payout, while Charles Bibby and his wife, Helena Bibby, will get $39.7 million.

Pointy is Google’s fourth acquisition in Ireland over the past decade. More remarkably, it is Cummins’s second sale to the tech giant. It acquired his earlier start-up, Plink, in 2010 for an undisclosed sum, in a deal that Mr Cummins described as “life changing”.

Ironically, the talented techie was turned down for a job with Google when he applied to the tech group in 2005.

The $750 kit is attached to a retailer’s barcode scanner, and products are uploaded to the Pointy app as they are scanned, allowing people to find what they are looking for from local retailers rather than forcing them to order online.

Pointy is expected to continue to operate from its own Dublin offices and develop its product platform.