Skmmp, Shorla Pharma, and Nolan’s of Clontarf up for award sponsored by Eirgrid 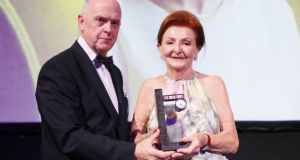 Three companies have been nominated for the Local Enterprise of the Year award in this year’s Irish Times Business Awards.

The awards, in association with KPMG, will be held in September as a virtual event. This is the third year they have been running.

For the Local Enterprise of the Year award, sponsored by Eirgrid, the nominees are Skmmp, Shorla Pharma, and Nolan’s of Clontarf. The award was won last year by fast-growing plant-based frozen foods business Strong Roots.

Skmmp (pronounced “Skimp”) is a virtual showroom that offers a solution for luxury fashion giants now having to rethink how they operate without a digital wholesale sales strategy.

Its virtual showroom centralises wholesale order management. The company has been approached by big Italian brands such as Tod’s, Bottega Veneta and others seeking its help to digitise their collections to weather the crisis, allowing them to carry on trading without physical showrooms.

Skmmp was founded by Aileen Carville in 2015. She then launched the digital showroom at the London and Paris fashion weeks in February 2018.

Its digital solution works in tandem with the physical showroom, allowing buyers to migrate on to the digital platform and complete orders remotely. An average order takes 20-30 minutes on Skmmp, reducing conventional order administration and processing by 70 per cent, the company says.

Ms Carville has had a long history in fashion. She was head of sales and PR at John Rocha for more than 12 years, travelling to every season’s shows with the collection.

Last December she was selected out of 1,200 global start-ups to be part of Startupbootcamp at FashionTech Milan, where partners such as Prada and Accenture aligned their own innovative development with the start-ups selected.

Shorla, an Irish healthcare start-up, was founded by Sharon Cunningham and Orlaith Ryan in Clonmel, Co Tipperary in 2018. It is focused on developing oncology drugs with a focus on rare, orphan and paediatric cancers.

This includes helping to make existing treatments easier to use. One example of this is a children’s cancer drug the company has redeveloped from a difficult-to-swallow capsule into an oral solution.

The founders met when they worked together at EirGen Pharma, the Waterford company founded by Patsy Carney and Tom Brennan, which was acquired by US drugs firm Opko for $135 million in 2015.

Their company won the overall award at the Ireland’s Best Young Entrepreneur competition last year and the founders were included on a list of 50 people to watch out for in 2020 by The Irish Times. The company raised $8.3 million (€7.4 million) in June.

Shorla is still in its prelaunch research and development phase, but its first two oncology products have been presented to the US Food and Drug Administration for approval with a third to follow shortly.

Nolan’s of Clontarf was founded by Paddy Nolan in 1958 as a local convenience store. It is an independent, family-run business that has modernised and moved with the times, both in terms of its store and product offerings.

Nolan’s completed a major revamp and extension of its premises in September. “The overall Nolan’s redevelopment project is still a work in progress and represents a several million euro investment,” the owners said.

The business is well known locally and plays an important role in the Clontarf community, supporting local sports clubs, schools, charities and community events each year. The business also has a coffee shop and a hardware store next door.

Nolan’s regularly expands its product offerings in all departments and in particular has a growing range of health food and produce from Irish artisan producers.

The shop also has a green focus. In January, it became the first Irish retailer to sell BioBag, a 100 per cent compostable and reusable shopping bag.