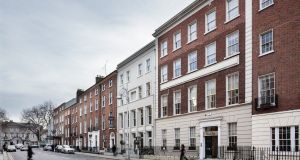 30-33 Molesworth St, which was previously owned by Green Reit, has been sold to German investor KanAm Grund by Henderson Park for €60m.

UK property company Henderson Park Capital is understood to have secured about €60 million from the sale of a prime Dublin office building to the German real estate fund manager, KanAm Grund.

The property at 30-33 Molesworth Street forms part of the Capital Collection, a portfolio of five prime Dublin offices that Henderson Park acquired as part of its €1.34 billion buyout of Green Reit in 2019.

Eastdil Secured was formally appointed in January of this year to handle the sale of the Capital Collection in one or more lots. The portfolio, which is distributed across Dublin’s core central business district also included One Molesworth Street, 2 Burlington Road, 5 Harcourt Road, and Fitzwilliam Hall.

Henderson Park is understood to be seeking in excess of € 400 million from the overall sale of the five properties within the Capital Collection.

News of KanAm Grund’s acquisition of 30-33 Molesworth Street comes just one week after another German investor, KGAL, confirmed its € 94 million purchase of the Dublin headquarters of the EBS Building Society at 2 Burlington Road.

Located almost immediately across the road from the gates of Leinster House and within the heart of Dublin’s traditional central business district, the property is home to a number of blue-chip corporate occupiers including Maples Group and Savills Ireland.

KanAm Grund can expect to secure a yield of around 3.6 per cent on its investment. Molesworth Street represents the German fund’s fourth significant office investment in the Irish market.

Earlier this year, KanAm paid around €35 million in an off-market transaction for One Upper Hatch Street in Dublin city centre. The office investment is occupied predominantly by Big Four accountancy firm, Deloitte.

Last October, it acquired the Wythe Building on Cuffe Street in Dublin city centre in another off-market transaction for around € 20 million. And in November 2018, KanAm acted on behalf of South Korean institutions, Hana Financial Investment and JR AMC in their €106 million purchase of No 2 Dublin Landings in Dublin’s north docklands

While KanAm is still at a relatively early point in terms of its overall investment in the Irish market, it is a major player internationally with more than €8.25 billion in assets under management.

“This is the second asset sale from our Capital Collection and we are pleased to conclude this sale with an international real estate investor of the standing of KanAm Grund Group,” said Nick Weber, founding partner and chief executive at Henderson Park.

“Ireland remains a key investment market for Henderson Park and we now have a proven and experienced team and a permanent operating presence in Dublin. We expect to generate further liquidity from the remaining assets within the Capital Collection and to use proceeds to invest in our Irish development pipeline.”