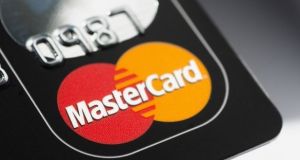 Recently filed accounts show turnover at Mastercard Ireland Limited almost tripled last year, rising to €177.8 million from €60.5 million in 2018. The subsidiary attributed the jump in revenues to an increase in services to other group companies, which it expects to continue to grow.

The accounts also indicates the company accepted a €130 million non-refundable capital contribution from is parent Purchase Street Research on the day that the company was liquidated. Mastercard Ireland’s new parent is Global Mastercard LP (UK).

Mastercard, the second largest payments company globally, has had a base in the Republic since late 2008, following its $100 million (€84.5 million) acquisition of Irish firm Orbiscom. It has significantly grown its Irish business in recent years after deciding to locate much of its research and development work here.

The company now employs about 650 people locally and in late February announced a significant expansion with investments in its artificial intelligence, cybersecurity, blockchain, and user-experience teams here.

Overall, Mastercard intends to take on an additional 1,500 people over the next five years and has taken additional office space at One and Two South County, a newly-built campus site in Leopardstown, south Dublin, near to its current home.

The latest accounts show administrative expenses ballooned last year, climbing from €55.5 million to €160.9 million, which the subsidiary attributed to increased charges from other group companies.

The accounts note that Orbiscom was dissolved at the end of 2019 with its net assess of €26.5 million transferred to Mastercard Ireland and recorded as equity.

The average number of people working for the company at the end of last year was 443, up from 354 in 2018. Staff-related costs, including wages and salaries rose from €35.5 million to €50.5 million.

Mark Barnett, who was recently appointed president of Mastercard’s European business, told The Irish Times in May that the company intended to proceed with its plans to expand locally despite the Covid crisis, saying the pandemic has had little material impact on the group.

1 Aldi to impose limits as Christmas toys go on sale
2 First look: Is the iPhone 12 Pro the best smartphone out there?
3 Irish elearning company LearnUpon closes €47.4 million investment
4 Fair deal? Family at odds with hospital and each other not so sure
5 Ryanair lags rivals as Covid-19 vaccine hopes buoy markets
6 Irish house prices could buck European trend and fall this year, S&P says
7 What to consider if older person or loved one needs care at home
8 Streaming services set for Christmas battle after drama-filled year
9 ‘Tailored’ loan relief better than blanket breaks as Level 5 looms - Central Bank
10 US set to unveil antitrust case against Google
Real news has value SUBSCRIBE