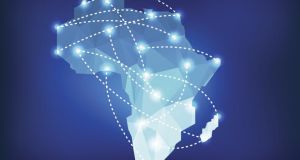 Differences in culture, business approach and regulation may put many people off the possibility of growing into places such as Africa but that doesn’t mean there aren’t major opportunities there

Terms such as “tech start-up” and “developing world” are not frequently heard in the same sentence. Irish companies looking to go big usually aim for our closest neighbour, the UK, or perhaps the European Union mainland or the United States, to scale.

Not every Irish tech company has its sights on traditional markets such as the US or Europe, but labelling regions with the “developing” banner often undermines their potential as innovative business hubs.

Differences in culture, business approach and regulation may put many people off the possibility of growing into places such as Africa or Central and South America. That doesn’t mean there aren’t major opportunities there. Just look at Denis O’Brien in the Caribbean.

John Murphy has been quietly building a customer base for his web-based management system Multi-Spot in places as far flung as Cameroon, Ethiopia, Kenya, Nigeria, Tanzania and even Pakistan. Providing low-cost and, more importantly, low- power wireless units and computers, his company Mandac is fast becoming a major player, particularly in sub-Saharan Africa.

Our growth has been organic,” he says. “We started in Dubai. From there we moved into Kenya, and from Kenya we went to Tanzania and so on.

Murphy offers a number of services: low-power computing, usually for schools, as well as prepay and metered internet access. The computers are manufactured abroad with one design focus at the heart: power efficiency. They run off about 10 per cent of the standard power requirement we’re accustomed to in the West. They also run off 12 volts because “everyone in Africa will have access to a car battery,” says Murphy.

“They are fit for purpose and can do almost anything,” he adds. “They run email, YouTube, spreadsheets and all the standard office products.”

Good infrastructure is a consideration every company must take into account when looking at foreign markets. In an Irish context this might refer to a well-connected digital grid as well as more traditional factors like modern road networks. Things can be a little different elsewhere.

“The major thing we came across when we first started seven years ago was the importance of energy-efficient equipment. In sub-Saharan Africa, 85 per cent of the population do not have access to grid electricity, and the other 15 per cent suffer frequent power outages,” says Murphy.

“We’re also working in a constituency where a huge number of people don’t have bank accounts. So we must support a range of payment options for our prepay internet services: cash, scratch cards and debit cards, mainly.”

And while sub-Saharan Africa may not be the most digitally connected place in the world, one technology that has become ubiquitous: the mobile phone.

“People here may not have a bank account but they will almost certainly have a mobile phone and phone credit is a negotiable commodity,” says Murphy.

Paul Dunne’s Digital Skills Academy was founded back in 2008 in response to the growing gap in formal online digital technology training. “After the Apple iPhone was launched in 2007, all of a sudden there were two million people around the world claiming a new working title: mobile app developers. This was a brand new career role,” says Dunne.

“As the adoption of internet mobile and digital services increased there was always going to be issues with skills supply. We offer an online, DIT-accredited BSc in digital technology.”

In recent times the academy has moved out of Ireland, with its focus firmly set on specific although somewhat unlikely target markets: South Africa and Mexico. Digital Skills Academy will be launching its first programmes with participants from both these countries in October.

“We are particularly interested in countries that are global but also positioned to have key trade flows and influence in their regions,” he says.

“South Africa is a key regional player in sub-Saharan Africa, while Mexico is the gateway into Latin America.”

Fear of the unknown

There are many perceived reasons why some regions might be considered out of bounds for Irish start-ups. Poor infrastructure, corruption and significant poverty are not necessarily the best criteria when searching for markets abroad.

The perception in the West of “developing” countries is frequently skewed by narrow media coverage and perhaps a fear of the unknown.

“Certainly there are significant issues with poverty in both Mexico and South Africa, not to mention significant urban rural divide,” says Dunne, who has been travelling back and forth to both places. “Still, many of the terms that are used, and the developed world perspective more generally, can be unhelpful and often incorrect.

“We underestimate how much there is in places like Mexico City. They already have significant infrastructure. News reports would have you believe there’s corruption and crime at every level in Mexico. I personally haven’t experienced any. Either directly or indirectly, I haven’t been asked to do anything questionable.”

Having an accent and explaining the difference between “crack” and “craic” are great icebreakers for Irish start-ups in the US. All the better if the American being charmed claims Irish roots. These kinds of cultural weapons may not be as useful in sub-Saharan Africa. Still, the Irish card may offer advantages in different ways.

“Not everyone is aware of the geographic and cultural differences between Ireland and the UK. Those who do understand the distinction, though, appreciate it,” says Dunne.

“It’s very useful being part of a country that has no international enemies,” says Murphy. “The Irish football jersey is one of the most valuable things I have.”