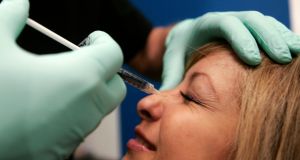 The third biggest deal was the $86.3bn purchase of Allergan, the Irish-domiciled maker of Botox. File photograph: Bloomberg

The sale of Irish-headquartered pharmaceutical company Allergan to US drug maker AbbVie was one of the top three biggest mergers and acquisitions (M&As) in the world last year, according to a major report.

Mergermarket, the leading provider of M&A data and intelligence, has published its 2019 report which revealed that global M&A activity last year was down 6.9 per cent on 2018 to $3.33 trillion across 19,322 deals.

The third biggest deal was the $86.3 billion purchase of Allergan, the Irish-domiciled maker of Botox. AbbVie employs 600 in the Republic, while Allergan employs 1,700. The deal was reported to have cost $63 billion at the time.

The biggest deal of the year was in the defence sector with the merger of United Technologies Corporation and Raytheon Company for $88.9 billion.

The second biggest deal was in the pharma, medical and biotech sector, with the acquisition of Celgene Corporation by the Bristol-Myers Squibb Company for $87.8 billion.

Overall, it was the sixth successive year at more than $3 trillion and was up slightly on 2016 and 2017 levels. However deal making slowed significantly in the second half of the year, falling by 24.2 per cent.

The average size of deals with a disclosed value rose to $389 million from $353 million in 2018. It was the second highest value on Mergermarket record behind 2015, a record year for global M&A.

What about European M&As?

The past year also recorded 38 megadeals, defined as worth more than $10 billion, which was also the highest number of such deals since 2015.

While Asia-Pacific was down 17.5 per cent, the US market, up 1.5 per cent on 2018, showed strong resistance throughout, supported by a relatively strong economy and a number of large domestic deals.