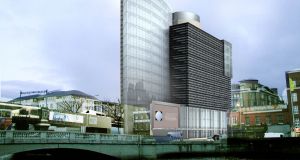 Artist’s impression of Johnny Ronan’s plan to build Dublin’s tallest building at Tara Street. The idea has been scuppered.

There were dramatic scenes in Dublin and Wexford this week as at least four insurance brokerages and the industry’s representative body were raided by officials from the European Commission in Brussels.

The raids, which also featured officers from the Republic’s Competition and Consumer Protection Commission, as well as members of the Garda, took place on foot of allegations of anti-competitive practices in the market for insuring trucks and lorries.

The insurers concerned included the Dublin offices of global insurance brokers Marsh and Aon as well as the headquarters of Campion Insurance in Dublin 22 and Wright Insurance Brokers in Wexford.

EU competition authorities are looking into commercial insurance as they examine the industry for potential breaches of anti-trust rules that prohibit cartels and restrictive business practices.

Separately, the European Commission raided the offices of Insurance Ireland as it assesses concerns over access to two databases used by insurers in the Republic.

The following day, the Government approved the drafting of legislation reforming the State’s insurance compensation fund. This follows the collapse of Setanta Insurance in 2014 and will likely lead to further increases in motor premiums. The main thrust of it is to increase the level of cover to consumers of insolvent insurance companies to 100 per cent from the current level of 65 per cent.

This will be funded by industry and insurers will have to contribute 2 per cent of gross written motor premiums so that there’s a kitty in place to meet part of the cost of any future liquidation of insurers operating in the Irish motor market. This, however, is likely to be passed on to motorists in the form of higher motor premiums.

Taoiseach Leo Varadkar and Minister for Finance Paschal Donohoe have had a couple of weeks to get used to their new surroundings on Merrion Street, and we’re beginning to get an idea as to how the new administration might shape up.

Donohoe has said he intends to merge the universal social charge and PRSI into a single social insurance payment, something Varadkar pledged to do during the Fine Gael leadership campaign.

His “guiding principle” is to reduce the income tax burden for those on low and middle incomes, which he said “must be achieved in a way that is both affordable and sustainable”.

Varadkar has already indicated that he wants to cut income tax, and none of this will come cheap with the shortfall likely to be made up for with higher taxes in other areas.

Indeed, the European Commission published a research paper this week which showed axing the progressive USC would reduce income tax receipts by 20 per cent, or €4 billion, severely restricting Government expenditure.

The commission said the Government faces a difficult task in trying to reduce high marginal tax rates while generating a similar level of tax revenue and maintaining progressivity.

A complete abolition of the USC with the two standard income tax rates held constant would come “at a very high price for public finances”, it said.

All of that at a time when, despite almost full employment, half-year exchequer returns show the Government’s tax revenue is still running behind target. That being said, the shortfall has narrowed on the back of a pick-up in VAT receipts and corporation tax.

Business leaders were almost unanimous as Donohoe came into office that capital spending would have to be prioritised, but the new Minister this week poured cold water on that.

Donohoe said a hike in capital expenditure could overheat the economy, pushing up prices and eroding competitiveness, similar to what occurred in the mid-2000s.

Meanwhile, the public just has to get on with it. Rising rents associated with the housing crisis were blamed this week for a hike in the living wage. The Living Wage Technical Group raised what it considers the minimum hourly pay rate a worker needs to cover basic cost of living expenses to €11.70.

The new figure represents an increase of 20 cent per hour on the previous rate, and is now nearly a third higher than the legally required minimum wage, which is set at €9.25 an hour.

There were yet more figures this week which indicated that the situation facing house buyers continues to worsen. Property website MyHome.ie, which is owned by The Irish Times, said property prices are now rising by an average of €4,000 a month.

The average monthly jump in values recorded on newly listed properties over the last six months was more than double that registered by rival website Daft.ie in a similar report last week.

Minister for Foreign Affairs Simon Coveney held a “blunt and frank” 45-minute meeting with the UK’s Brexit secretary David Davis, after which he warned Britain’s current approach to negotiations “is not going to work”.

What he meant was that the UK cannot fully close the door to the single market and then expect it to be opened again for a free trade agreement. He also suggested the divorce talks could stretch beyond the two-year deadline of March 2019.

Meanwhile, JP Morgan chairman and chief executive Jamie Dimon met Leo Varadkar in Dublin to discuss plans to expand the group’s business here. That came after IDA Ireland chief executive Martin Shanahan said the pipeline of foreign direct investment in the second half of this year looked “reasonably strong”. For one thing, BlackRock, the world’s largest investment manager with $5.4 trillion (€4.75 trillion) of assets under management, is understood to be considering Dublin among a shortlist of potential European cities to set up a post-Brexit EU base.

Sources said that planning remains at an early stage but that the Republic is competing against Paris, Frankfurt and Amsterdam. “BlackRock has not made any decisions yet as we wait until more information becomes available,” a spokeswoman said.

Separately, the global chairman of consultancy firm KPMG said most firms had yet to pull the trigger on their Brexit plans while the prospect of meaningful tax reform in the US remained high.

“The sooner we get greater clarity around tax reform in the US and Brexit, I think, the faster some of the pressure in the system for more robust growth will come to fruition,” John Veihmeyer told The Irish Times.

There were contrasting fortunes for two proposed developments this week as it emerged the landmark Gleeson’s pub in Booterstown is to be extended into a hotel, while developer Johnny Ronan’s plan to build Dublin’s tallest building was scuppered.

Gleeson’s will be extended into a boutique hotel to capitalise on the acute shortage of guest accommodation in the city, proprietor John Gleeson said, as pubs’ traditional reliance on under-pressure alcohol sales is on the wane.

In the city centre however, Johnny Ronan’s 22-storey tower beside Tara Street Dart station was rejected by Dublin City Council because of the potential detrimental effect on most of the historic core of the city.

Ronan’s company, Tanat Ltd, had sought permission from the council last May for the €130 million, 88m tower with offices and a 110-bedroom hotel, with a roof-top restaurant and bar, on the south side of the Liffey.

6 INM to rebrand as Mediahuis Ireland from May

8 Covid-19 has changed the office for good