Inside Business Podcast: What made the headlines in 2017? 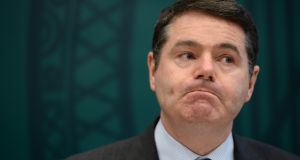 Minister for Finance and Public Expenditure and Reform, Paschal Donohoe on budget day. Ireland was Europe’s fastest growing economy in 2017 despite Brexit fears, but what might 2018 hold? Photograph: Dara Mac Dónail

Ireland was Europe’s fastest growing economy in 2017 despite Brexit fears, but what might 2018 hold?

On the latest Inside Business podcast, Cliff Taylor joins Ciarán Hancock to take a look at what contributed to this economic growth and the big issues still facing the Government heading into the New Year.

Also casting a glance back at the year that was, Laura Slattery chronicles the ups and downs at RTÉ, Mark Paul reviews the extraordinary goings on at Independent News and Media, while Dominic Coyle and Joe Brennan have the latest on the ongoing tracker mortgage scandal and what might happen next.

In the second part of the show, Sport Ireland chief executive John Treacy is this month’s guest on the Business of Sport. He speaks about where the organisation’s budget is spent, how anti-doping measures work and why making P.E. as Leaving Cert subject is such a good move.

The Business of Sport, co-hosted by Mick O’Keeffe of Teneo PSG and Ciarán Hancock, features interviews with leading figures from behind the scenes of Irish sport, as well as analysis of the latest sports industry news.