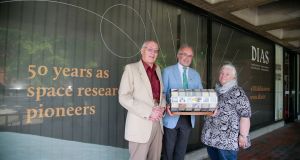 Prof Alex (Archie)Thompson (retired), Emeritus Professor Luke Drury, DIAS, Hillary O’Donnell (former technician) at the launch at Dublin Institute of Advanced Studies of the programme of events for July to mark the 50th anniversary of the first humans landing on the moon as part of NASA’s Apollo 11 mission. Photograph Nick Bradshaw for The Irish Times

Apollo 11 has a very special place in the history of Irish space research. Irish hands were among the first to take possession and evaluate moon rock brought back to Earth by the historic mission which put a human on our nearest planetary neighbour for the first time on July 20th, I969.

It so happened that astrophysicist Prof Denis O’Sullivan was on sabbatical in the University of California, Berkeley, and working with the noted US physicist P. Buford Price around the time of Apollo 11 when the material was assigned to them.

It led to a remarkable period of space research and development of advanced technology at Dublin Institute of Advanced Studies notably through involvement in subsequent Apollo missions and eventually the use of the Space Shuttle to pursue experiments.

It is fair to say that O’Sullivan pioneered Ireland’s involvement in space research. In those early years he worked closely with Prof Alex Thompson in the development of a cosmic ray detection system – both are now retired.

Cosmic rays are charged particles of great energy which reach the Earth from space. They come from outside the solar system and travel at just under the speed of light. Measuring the charge and energy spectra of ultra heavy cosmic rays, for example, provided insights into nuclear reactions taking place in exploding stars. They are composed primarily of high-energy protons and atomic nuclei.

The atmosphere on Earth protects us from their potentially harmful effects, but the extremely low levels of atmosphere on the moon make it a good base where measurements of the levels and behaviour of cosmic rays in the Solar System could be determined, Thompson explains. They examined their tracks in moon rock.

The two published pioneering research together, including extensive work on the production and decay of sub-atomic particles known as hypernuclei, which leave a trail of radiation damage not visible to the naked eye.

Given their proven expertise in this field it wasn’t a matter of luck, but O’Sullivan “just happened to be in the right place at the right time, as so often happens in science,” suggests Prof Luke Drury, a former senior professor and director of DIAS School of Cosmic Physics – Astronomy & Astrophysics.

Having formed a strong relationship with Price, a leading researcher with General Electric Corporation in New York before moving to Berkeley, they pioneered the use of Lexcan, a commercially available polycarbonate polymer used as a detector in which the tracks of charged particles could be revealed by chemical etching.

It was “a low-cost plastic that was sturdy and suitable for use in space,” Thompson adds.

Their work led to Ireland having its first official experiment in space in 1972 on Apollo 16 with a small detector the form of a cellulose stack (now in the National Museum) carried in the lunar model, which was exposed on the surface of the moon and returned to Earth. More Irish experiments were conducted on Apollo 17.

With the European Space Agency technology centre (ESTEC), O’Sullivan and Thompson then proposed a much more ambitious experiment aimed at obtaining information about ultra heavy nuclei in cosmic rays as it was believed then it would reveal their origin.

What became known was the Ultra Heavy Cosmic Ray experiment was selected by Nasa in 1976, which was incorporated into a spacecraft known as the Long Duration Exposure Facility (LDEF) which was launched by the Shuttle in 1984.

Its retrieval was delayed because of the 1986 Challenger disaster. By early 1990 the LDEF’s situation became precarious. Unexpectedly intense solar activity had caused the Earth’s upper atmosphere to decay faster than anticipated. When it was finally retrieved on one of the resumed shuttle flights (a Columbia mission) computer predictions indicated it was only weeks away from a catastrophic re-entry into the Earth’s atmosphere. The LDEF was a 12-sided cylindrical satellite, containing a two-ton cosmic ray detector designed and built in DIAS in 5 Merrion Square by O’Sullivan and Thompson.

But there was a considerable bonus as it was only supposed to be in space for a year, Thompson recalls. They had much more data and samples to work on. The silver protective surfaces of the detector trays “were bombarded with micrometeorites due to the long exposure” and they provided the largest sample of rare ultra heavy particles, including a significant sample of actinides, which are elements with atomic numbers higher than 88.

The significance of that work, Drury says, “is part of the question, where does the world come from? where do all the elements come from? what are we made of? how does the world work”. The answer nowadays is a belief they come from merging neutron stars using vast amounts of energy.

As for the Apollo programme, “for the first time we saw the Earth from space, as a whole”, which also indicated how fragile it was, how thin its atmosphere was. It also brought recognition it needed to be treated a whole system and prompted the taking off of a global environmental movement.

While Thompson looks forward to the prospect of humans again revisiting the moon or even Mars, Drury emphasises the benefits of using robotic spacecraft to explore the Universe; “they are far cheaper and far better”.

Thompson recalls watching the Apollo 11 landing on television “minute by minute”, and his “sense of admiration for the technical brilliance of the achievement”.

Hillary O’Donnell, a former technician at DIAS who painstakingly carried out the dark art of etching cosmic ray samples, which was so critical to O’Sullivan’s and Thompson’s experiments, remembers watching it at home on a very grainy TV screen, not realising then she was going to be involved in so many experiments that stemmed from that achievement.

For current senior professor at DIAS Peter Gallagher, Apollo 11 is “all ancient history” though Neil Armstrong and Buzz Aldrin were US cultural icons of his youth on a par with JFK and Elvis. He grew up with the Shuttle launches and the excitement of returning to space on a regular basis at low cost – though that was never fully realised because of compromises on design.

The cosmic ray work made DIAS and Ireland “extremely famous” in the space science communities of ESA and Nasa, he notes, though the country was not a major investor in science at that time.

Thompson went on to do important work on the effects of cosmic rays on astronauts and air crews, while Drury opened up a new front in plasma astrophysics more on the theoretical aspects of high energy particles when he became senior professor in 1987. Gallagher works on solar flares and the acceleration of particles on the sun, which will soon feature in a future excursion into space.

The 50th anniversary of the moon landing is of particular relevance to Birr Castle, the home of astronomy in Ireland. While most people are aware that during the 1800s it was host to the largest telescope in the world, the Rosse family have direct links with the moon from that time, explains Lady Alicia Clements, daughter of the current Earl of Rosse, Brendan Parsons.

Long before the Apollo mission, Laurence Parsons – the fourth Earl of Rosse (1840-1918) – invented an instrument to measure the temperature of the moon by focusing on lunar radiation and produced temperature graphs whose accuracy were only recognised long after his death.

Moreover, there is a bowl-shaped lunar crater on the moon named in 1862 in recognition of the family. It was officially “listed” in the 1970s and photographed by Neil Armstrong during Apollo 11. This was acknowledged in a letter he sent to the family on returning to Earth.

Addressing her grandmother, he thanked the family for their contribution to science and confirmed the temperature calculation proved useful during the mission. “With all good wishes and appreciation for the contributions of an astronomical family. Apollo 11,” it concludes.

The lunar heat machine looks like a short fat telescope with a mirror at its base instead of a lens. A thermocouple measures temperature variations. It and two original documents including the Armstrong letter are on display at Birr Castle Science Centre.

The 1969 landing was very exciting for the family, she recalls, as her parents were in New York and watched it on television, keeping her older brother Patrick awake to witness history – he was three months old. Her father, she adds, is “fine and fit” and looking forward to July 20th.

When the original telescope was built, it became the centre of learning and discovery. The family have always wanted to continue that tradition.

The fact that this illustrious scientific past has now led to the siting of the I-LOFAR radio telescope in Birr, meant that part of the most sophisticated and advanced astrophysics research projects in the world is being conducted in the midlands of Ireland. “It’s thrilling for us that this tradition continues.”