Support your favourite musicians and make some money in the process 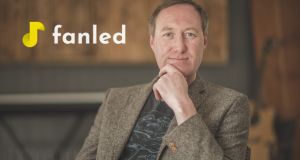 Fanled founder Bernard Hayes: “We are essentially a music publisher with its own crowd-funding vehicle.”

Bernard Hayes has been in the music industry for the last 25 years. He knows the business inside out, having started out as a roadie, and worked his way to the top as an award-winning festival producer. Following time out to return to study as a mature student, Hayes is now the driving force behind the new music crowd-funding platform, Fanled.

Hayes was inspired to create Fanled by the fact that most of today’s musicians get paid very little for the songs they compose. “Spotify pays .0038 per stream, therefore for the artist to earn € 3.80 their song needs to be streamed 1,000 times,” he says. “We have created a new way for fans to own songs and for artists to be funded. We are essentially a music publisher with its own crowd-funding vehicle. We enable fans to buy equity in a song of their choice and this money goes straight to the artist and enables them to earn a living.”

Fanled is an app-based platform which licenses 25 per cent of a song for six years and invites fans to pay €5 to buy one of 5,000 shares in it. When the song is streamed, the artist gets 75 per cent of the play fee and the fans 25 per cent. Fanled makes its money by charging a handling fee of 10 per cent on the transactions. Streaming services pay different fees so it benefits both the artist and the fans if the song is played on one of the better paying services. “The more times a song is streamed, the more money it makes for both sides so fans have the power to drive the success of their favourite artists,” Hayes says.

Hayes established Fanled in 2017 and came up with the idea while finishing his degree in business, tourism and event management at Sligo IT. “I was finding it very hard to operate as a music producer in the recession as the banks were not giving credit so I took the opportunity to go back to college,” he says. “I was in a lecture one day about macro business strategy and President Obama’s jobs Act which allowed non-accredited investors to get into investment. I instantly thought of fans and artists and how both could benefit from this law. I have seen amazing new artists struggle for years to make a living from their music. Eventually most of them give up and get a ‘real’ job and we all lose out. Fanled is the solution.

“We are the first to give music lovers the opportunity to not only directly fund an artist, but also to share in the ownership and responsibility for a song’s success,” Hayes adds. “Indeed, as a country, Ireland has a long historical connection with protecting artists’ rights as we have one of the oldest copyright laws in the world going back to the sixth century. The law was created after a manuscript was copied without permission by St Columba from St Finnian and a battle ensued in Sligo over the disagreement. King Diarmait mac Cerbaill resolved the conflict on the Hill of Tara with the judgment: ‘To every cow its calf and to every book its copy’ and that’s how the first copyright law was written.”

Fanled’s potential customers are music lovers and creators everywhere and while the company’s natural market is those in their mid-teens to late 20s, Hayes says the service is also being picked up by a more mature cohort who happen on new artists while streaming their old favourites. Costs to date have been contained at about €20,000 and this has been privately funded. Fanled has also been supported by Enterprise Ireland and Hayes is participating in its New Frontiers entrepreneurs’ programme at the LINC accelerator at Blanchardstown IT.