Castlebar company has ambitions to shave the world

De Facto, an eco-friendly oil that shaves closer and more smoothly, hopes to take on the ‘big boys’ 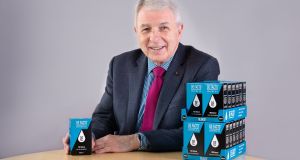 Tom Murphy: ‘The main benefit of using an oil instead of a foam or a gel is that you can actually see where you’re shaving’

After 25 years of selling other people’s products Tom Murphy has taken the plunge and developed his own. It’s called De Facto and it’s a shaving oil for men which Murphy says is superior to existing products for three main reasons: it shaves closer and more smoothly, it’s environmentally friendly as it only requires a few drops per shave, and it’s economical as a 50ml bottle of De Facto should be good for over 400 uses.

Murphy set up his Castlebar-based distribution company, Pamex, in the mid 1990s when he was made redundant from Syntex pharmaceuticals where he was the general manager. Pamex employs 18 people and distributes well-known brands such as Carmex lip balm and the probiotic IBS support, Alflorex.

From the off, Murphy’s attitude to distribution has been novel. His main interest is innovative personal care products that solve irritating everyday problems for people such as dry eyes, shaving burn and chapped lips. One of Murphy’s “finds” was the Total Shaving Solution oil which he brought to Ireland from the US and subsequently acquired the international distribution rights to. Twenty years and an estimated 160 million shaves later, Murphy has stepped back from Total to launch his own product which has taken two years to perfect.

“In the shaving world, the main products are owned by multi-national corporations and in my opinion they only give a reasonable shave and result in an absolutely massive amount of waste going to landfill,” he says. “The main benefit of using an oil instead of a foam or a gel is that you can actually see where you’re shaving and the oil allows the razor to glide over the face cutting the hairs but not the skin. And you don’t need four or five blades either, just your own favourite razor and hot water will do.”

While De Facto is initially being targeted at men, a version for women and a special formulation for sensitive skin will follow later in the year. A post-shave balm product is also in the pipeline. “It is estimated that 75 per cent of men experience difficulty with shaving as it irritates the skin. De Facto eliminates all razor burn,” Murphy says. “The product has been extensively tested (only on humans) and is fully dermatologically approved. Ireland is our prime target market to start and then we’ll be seeking distributors in Europe, Australia, New Zealand and the United States. Most of our sales will be export.”

One of the biggest challenges Murphy faced was coming up with a suitable name for the new oil. “We ended up with a list of about 80, but when the legal people started looking into them and assessing their robustness for a commercial environment, most of them fell by the wayside. In the end, I suggested De Facto and we were surprised to discover that it was available. We have gone for full trademark registration in multiple markets to get legal protection in what is a highly competitive commercial environment,” Murphy says. The company has just shipped its first order to Portugal and Irish consumers can buy De Facto online and in selected pharmacies.

Development costs for the products have been in the order of €250,000 which has been self-funded. De Facto is being made for Pamex by Cosmetic Creations in Claremorris, Co Mayo. “Reaction to the product has been overwhelmingly positive and online sales in the first three months of 2019 were well ahead of expectations,” says Murphy. “Much of our advertising will be digitally focused and will have a sense of fun. We hope it will make people sit up and take notice. We know we’re going head to head with the big boys, but because we have a much better product I’m offering a personal guarantee that if someone isn’t fully satisfied, we’ll give them their money back.”