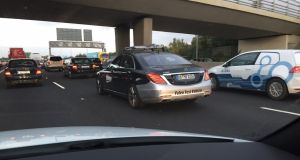 Lero, the software research group, has announced a collaboration with Valeo, the French car components and technology giant. The plan is to develop new sensor technology for autonomous cars. Valeo has an 1,100-strong research and development group, based in Tuam, and has been collaborating with NUI Galway for almost two decades now. Lero is funded by the Science Foundation of Ireland and partly based at NUIG. The new venture means Lero will need to fill an additional 10 PhD-level positions (it already has a 30-strong team) and two doctoral researchers.

So what is it that’s turning Galway into the Irish hub for autonomous car research, our answer to Nevada and California? The answer is rain. Of course, it’s not the only answer, but as a one-time resident of Ireland’s rainiest spot, I take a kind of perverse pride in knowing that the constant drizzle of Galway will one day lead to more intelligent autonomous cars. The objective now is to teach self-driving car software how to deal with weather and roads that you won’t find in the American west.

Dr Edward Jones of the college of engineering and informatics at NUI Galway is one of the leaders of the Lero research group, and he told The Irish Times that the wet weather of the west coast is indeed one of the reasons that the new collaboration will be based in Galway.

“What we do certainly have in the west is rain,” he said. “So if you’re looking to develop sensors that can cope with bad weather, well then we’re good for that. Of course, it’s much more than just rain. A lot of previous developments in this field have been centred around much less complex driving environments – highway driving, for instance, which may be high speed, but there are no pedestrians to worry about, no cyclists, and generally speaking the testing is done in very dry environments. Here, we will be able to put our sensors to the test in a much more complex environment, more complex weather, more complex street furniture and road layouts.”

An arguably greater reason is the industrial hub nature of the Galway area. The collaboration with Valeo has been going on for some time, thanks to the close location of the French company’s Irish operations, so the NUI Galway team will have access to Valeo’s test track facility in Tuam. The idea, though, is to take the work out of the lab as soon as possible.

“We will be starting with mostly lab work,” confirmed Dr Jones. “We will be taking the existing sensor technology and trying to develop better algorithms to deal with the data flowing from those sensors. Obviously, new technology is being developed all the time, but for the moment we want to focus on improving the signal processing side of things. We will be focusing on getting the most out of different sensors through application of signal processing, image processing, machine learning and related technologies, which are the core skills in the group here.

“Then we’ll start using the internal roads of the NUI Galway campus for field testing. Of course, we’re going to be very responsible about this, and safety is uppermost in our minds. We’re not going to immediately start running driverless cars around the campus, but it is a very rich source of data for us – lots of road furniture, plenty of pedestrians – that we can use under a very controlled environment.”

The real value of the collaboration, said Dr Jones, is that the NUI Galway Lero group isn’t necessarily focused on market-driven forces. “Of course, eventually everything we do will be commercialised, that’s the hope, but we can think a little bit beyond the immediate,” he said. “We’re well placed to take a longer view and look at new approaches and new technologies to solve the problems that need to be solved, and this fits well within the broader R&D ecosystem of industry.”

Dr Martin Glavin, who co-runs the Lero centre with Dr Jones, said: “Working with the Valeo R&D team our research aims to develop sensor technology that can see further and adapt to difficult driving conditions such as fog, heavy rain and darkness,” added Dr Glavin. “It will also be designed to better deal with real life road situations such as cyclists, pedestrians or animals wandering on to the road.”

So, at some point in the future, an autonomous car will become better at dealing with rain and poor weather conditions, and at some level it will be because its software knows how to deal with Galway rain.

How long will that take, though? With predictions of the arrival date of fully autonomous cars becoming ever more fluid (even Google has had to revise its own crystal-ball gazing) Dr Jones reckons it’s probably further away than people think. “In many ways perception of the current state of autonomous vehicle technology is more advanced than reality,” he said. “While autonomous vehicles are currently operating successfully in several locations, particularly in the US, this is often under road landscape and weather conditions very different to the more complex city and rural environments that would commonly be found in locations such as Ireland or elsewhere in Europe. That’s what we hope to achieve with our work, but as to when fully autonomous cars will become commonplace? I honestly wouldn’t like to say.

“You see, it’s not just about the development of the technology – it’s also about the regulatory environment, the customer acceptance, issues over insurance. But it’s also about a bigger question of whether such technology has value. The way the technology is developing is in response to the challenge, but we need to ask does it make sense for a machine, a computer to replace a human entirely? Is there a value in doing so? To get a machine to have reactions that are as good as a human? That could take a very long time yet.

“My point is that it’s hard to say if or when that will happen. Some think sooner rather than later, but there is a strong argument for the benefits of autonomy in a wide range of scenarios, even as the technology is evolving in capability and ‘intelligence’ and we’ll see more and more complex scenarios where autonomous operation will be feasible and useful. At the same time, of course, it’s important to ensure that use of autonomous operation does bring benefits, so understanding the needs of the user is paramount.”

Speaking about the partnership, Prof Mark Ferguson, director general of Science Foundation Ireland, and chief scientific adviser to the Government, said: “It is a tribute to researchers in Ireland that Valeo has chosen to work with Lero, the SFI Research Centre for Software Research, and establish this R&D partnership here. SFI Research Centres such as Lero continue to make important scientific advances which support enterprise and industry, develop critical skills, support regional development and enhance Ireland’s international reputation. We look forward to seeing the results of the partnership and the sharing of knowledge and expertise it will facilitate.”