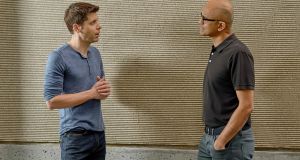 Sam Altman (left) who manages the company OpenAI, and Satya Nadella, the chief executive of Microsoft, which is investing $1 billion in OpenAI.

The cash infusion spells a new lease of life for OpenAI, which was set up four years ago by tech luminaries including Elon Musk and Peter Thiel out of a concern that AI would end up destroying the human race.

They wanted to win the race to full artificial general intelligence (AGI) - a system that can match, and eventually surpass, humans - in order to make sure it was used for good.

The project has been through a reorganisation this year, with Mr Musk no longer involved and Reid Hoffman, the venture capitalist and founder of LinkedIn, stepping in to become the biggest individual backer. With Microsoft’s money and Azure computing platform at its disposal, OpenAI hopes to have a shot at the goal it was set up for.

“We’re testing a hypothesis that has been there since the beginning of the field: that a neural network close to the size of the human brain can be trained to be an AGI,” said Greg Brockman, OpenAI’s chairman and co-founder. “If the hypothesis is true, the upside for humanity will be remarkable.”

Microsoft’s move to align itself with OpenAI echoes Google’s 2014 acquisition of DeepMind, the London-based AI research company that was also pursuing the human-level AI.

But Microsoft, though it is supplying cash and a computing platform, will be kept more at arm’s length. OpenAI’s board will continue to take all decisions about the research agenda and how its work is used. Microsoft will only have the right to appoint one director, the group said.

OpenAI will tap into Microsoft’s data centres to run its experiments, using the company’s Azure cloud platform, and Microsoft will get the first shot at commercialising early results from the research.

That could reinforce the software company’s efforts to become one of the leading AI companies, at a time when Google has become the acknowledged leader in advanced AI among the big tech companies.

Like DeepMind, OpenAI has used deep learning - a technique based on neural networks that emulate one theory of how the human brain works - to produce eye-catching results. But the work has been limited to standalone experiments in things such as automatic writing, manipulating a robot hand and game-playing, rather than a more generalised intelligence that can be applied to many different problems.

That has led many AI researchers to argue that deep learning systems, though achieving remarkable results on specific problems, will never bring a breakthrough in general intelligence by itself.

“From a scientific point of view, AGI is not going to be a single box,” said Kristian Hammond, a computer science professor at Northwestern University. “Any group that has a single view of how cognition works is going to fail.”

OpenAI disagrees - and is now hoping to hitch a ride on Microsoft’s supercomputing network to prove its doubters wrong.

The organisation believes it is about “five orders of magnitude” away from being able to build a neural network as big as the human brain, said Mr Brockman - implying a computer that is 100,000 times more powerful than today’s systems.

The result, OpenAI predicted, would be “a tool which combines the skills of Curie, Turing and Bach”, and one that can be used to tackle problems such as “climate change, affordable and high-quality healthcare, and personalised education.”

The cash injection reflects the huge computing demands of deep learning systems, which are trained on large amounts of data and then crunch through real-world examples in a form of highly advanced pattern-recognition. The systems need “a lot of capital for computing power”, OpenAI said - meaning that much of the money it has raised will be paid back to Microsoft for access to its systems. – Copyright The Financial Times Limited 2019