Elon Musk looks to wire your brain to the Internet 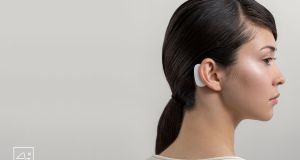 An artist’s rendering of a brain/computer interface made by Neuralink. The San Francisco-based company says it has created a device that could one day wire data links directly to the brain

Elon Musk aspires to make inserting a computer connection into your brain as safe and painless as Laser eye surgery. Neuralink, a company in which Musk has invested $100 million (€89 million), detailed the baby steps it has taken toward that goal. Neuralink plans a “sewing machine-like” robot that can implant ultrathin threads deep into the brain.

The company claims the system will eventually be capable of reading and writing vast amounts of information. But as with many of Musk’s other ventures, like spaceships or futuristic tunnels, one of the biggest challenges may be for his scientists to match his grand vision.

Musk, the billionaire chief executive of the electric carmaker Tesla who has famously claimed that he “wants to die on Mars, just not on impact,” has a reputation for doing bold things, as well as making even bolder claims that stretch credulity.

Like artificial intelligence, the idea of inserting a device into the brain that would allow speedy communication between humans and computers veers quickly into science fantasy. In his 1984 science-fiction novel “Neuromancer,” William Gibson posited the idea of something he called a “microsoft,” a small cartridge directly connected to the brain via a socket to provide a human user with instant knowledge, such as a new language.

Neuralink is just one player in an emerging field that could enhance human functionality or equip paraplegics with robots they could control with their minds. Others include Facebook and start-ups such as CTRL-labs — backed by the Amazon Alexa Fund, among others — which is trying to take a less invasive approach by focusing on neural signals anywhere on the body.

In a briefing Monday, Neuralink executives acknowledged they had a “long way to go” before they could begin to offer a commercial service. But they were ready to discuss their work publicly. Musk was not at the meeting. “We want this burden of stealth mode off of us so that we can keep building and do things like normal people, such as publish papers,” said Max Hodak, Neuralink’s president and one of the company’s founders.

Musk has been active in trying to help solve the engineering challenges that Neuralink faces, according to Shivon Zilis, project director at Neuralink. The company has received $158 million in funding and has 90 employees.

“I’ve been humbled by how helpless we are treating neurological diseases,” said Matthew MacDougall, Neuralink’s head surgeon. “We have the potential, for the first time in history, to solve some of these problems.”

Executives said their first emphasis will be to help patients with severe brain disorders, but the goal of the company is to design a miniature, wireless implant that ordinary individuals would elect to install — “something more like Lasik” eye surgery, Dr MacDougall said — and then control via an iPhone app. They spoke of communication via thought alone and of restoring motor and sensory functions, such as giving sight to the blind.

While the most fantastical visions for a brain-computer may be a long way off, Musk may have found a potential medical use. Hodak shared Musk’s optimism that Neuralink technology might one day - relatively soon - help humans with an array of ailments, like helping amputees regain mobility or helping people hear, speak and see.

The company is hoping to begin working with human subjects as soon as next year. The company says surgeons would have to drill holes through the skull to implant the threads. But in the future, they hope to use a laser beam to pierce the skull with a series of tiny holes. They plan to work with neurosurgeons at Stanford University and possibly other institutions to conduct early experiments. Jaimie Henderson, a professor of neurosurgery at Stanford and a specialist in the treatment of epilepsy and the use of a treatment known as Deep Brain Stimulation, is an adviser to Neuralink, according to Hodak.

In a demonstration at a Neuralink research lab Monday, the company showed a system connected to a laboratory rat reading information from 1,500 electrodes - 15 times better than current systems embedded in humans. That’s enough for scientific research or medical applications.

Independent scientists cautioned that successes in laboratory animals might not translate into humans and that human trials would be required to determine the technology’s promise.

Recently, the most advanced data for animal studies has come from the Belgian company Imec and its Neuropixels technology, which has a device capable of gathering data from thousands of separate brains cells at once. One of Neuralink’s distinguishing techniques is that it places flexible threads of electrodes in proximity to neurons, the tiny cells that are the basic building blocks of the brain. The ability to capture information from a large number of cells and then send it wirelessly to a computer for later analysis is believed to be an important step to improving basic understanding of the brain. The threads are placed using thin needles, and a so-called computer-vision system helps avoid blood vessels on the surface of the brain. The technique involves inserting a bundle of threads that are each about a quarter of the diameter of a human hair.

The flexible threads are actually thin sandwiches of a cellophane-like material that insulates conductive wires that link a series of minute electrodes, or sensors, much like a strand of pearls. They can be inserted in different locations and to different depths, depending on the experiment or application. Medical research and therapy may focus on different parts of the brain, such as centers for speech, vision, hearing or motion.

The flexibility of the Neuralink threads would be an advance, said Terry Sejnowski, the Francis Crick Professor at the Salk Institute for Biological Studies, in La Jolla, California.

However, he noted that the Neuralink researchers still needed to prove that the insulation of their threads could survive for long periods in a brain’s environment, which has a salt solution that deteriorates many plastics.

Despite a splashy gala introduction set for Tuesday evening at the California Academy of Sciences, where the company plans to distribute an unpublished research paper, Neuralink is certain to have plenty of competition. Over the past decade, the Pentagon has financed research both for basic brain sciences and to develop robotic control systems that would permit brain control of prosthetic devices.