The robots are rising through convenience 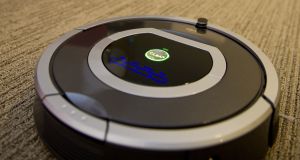 Roomba: a beachhead for all sorts of intrusion?

Between the effect of automation causing mass unemployment to the risk of artificial intelligence causing mass social upheaval, we are being increasingly warned about what might be described as the “rise of the robots”.

However, while we are all familiar with the sci-fi depiction of intelligent machines run amok, we suffer from a lack of imagination when it comes to picturing how we get from here to there – we give no thought to what the transition from a present of useful tools taking on an increasing share of our mental and physical burdens to a future of self-evolving machine intelligence threatening humanity’s autonomy might look like.

Tesla founder and all-round tech pioneer Elon Musk has been the most vocal Cassandra on the risk of artificial intelligence, and back in March, he described to Vanity Fair why he felt people are so complacent about the speed with which AI research is developing. “Mostly because in everyday life you don’t see robots walking around. Maybe your Roomba or something. But Roombas aren’t going to take over the world.”

He’s right, of course – those cute little automated vacuum cleaners are not on the cusp of global domination. But I was reminded of Musk’s quote this week, when the phrase “hoovering up your data” took on a new, far more literal meaning when it was revealed that iRobot, the company behind the Roomba, is preparing to market digitised house plans accumulated from all the little vacbots they have roving around people’s homes.

Earlier Roomba versions just whizzed around for long enough to cover the area they were due to clean, but beginning with models released in 2015, the dust-sucking gadget used “simultaneous localisation and mapping” (SLAM) technology to map its domestic terrain so as to have a clearer idea where it was going and where it had already cleaned.

Until now, those digital maps remained on the device, but iRobot is preparing to collect and sell that data to companies at the forefront of the smart home revolution – most obviously Amazon, Apple and Google, each of whom sell voice-activated speakers-come-digital assistants as they vie to control the smart home of the future.

In an interview with Reuters, iRobot chief executive Colin Angle discussed his company’s new approach. “There’s an entire ecosystem of things and services that the smart home can deliver once you have a rich map of the home that the user has allowed to be shared,” he said.

Essentially, Angle is positioning the Roomba as the domestic cartographer for the smart home, giving Internet of Things (IoT) devices a spatial awareness they had previously been lacking, potentially allowing speakers to alter acoustics, thermostats to optimise temperature, smart bulbs to adjust their lighting, based on a more complete awareness of their surroundings.

For iRobot, the change in focus is a way to fight off cheaper rivals that are threatening to make the Roomba just another commodified domestic appliance, but which are focused on collecting dirt rather than collecting spatial data.

While users can opt out of the service, it seems to me that selling maps of people’s homes is a pretty fundamental privacy rubicon, a convergence of digital and real-world privacy concerns a few levels beyond what we are used to.

Up to now, the greatest concern about IoT was the vulnerability of cheap network-connected gadgets to hacking, but it is the legitimate harvesting of all sorts of data from devices that actually gives me greater pause, because of what it says about our complacent attitude to privacy.

There is something significant about the Roomba acting as vehicle for breaching this frontier of privacy – it is arguably the first mainstream domestic robot device, and its general cuteness is precisely the reason Musk dismissed the Roomba as in any sense threatening in his interview. Its mundane functionality prohibits us from viewing it as in any way instructive of larger patterns of changing attitudes to technology.

However, while the Roomba’s digital mapping isn’t in itself a step towards artificial intelligence, this development clearly illustrates the sort of decisions and compromises that may lead us to walk blindly into a dangerous future of AI domination.

Over and over again, we see how for most people, convenience trumps privacy – psychologically, we are ill-prepared to make a choice between an immediate gain and a theoretical loss.

The Roomba certainly offers convenience – never pick up a vacuum cleaner again – and the Amazon Echo, Google Home and upcoming Apple HomePod speakers mark a similar watershed. These devices listen to our every word, which plenty of people seem to tolerate just so they can ask what the weather is going to be like today or request a song to be played. But already, we are seeing how the always-on listening device in the home is a beachhead for all sorts of intrusion – Amazon handed over recordings to police in an Arkansas murder case earlier this year, presumably the first of many such cases.

These little vignettes illustrates how we get from the present of convenient devices with all sorts of learning capabilities to the future of artificial intelligence potentially threatening our social fabric, filling in the blanks in our imagination from the here to the there.

AI devices, then, will increase their hold on our lives not by coercion, but by convenience; they will not be resisted, but welcomed, on an incremental basis, until at some point we may discover we have lost control of our machines, and the robots have arisen.