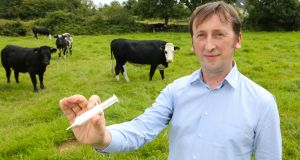 Researchers based in Galway are working with a substance they believe may become a game changer in the fight against antibiotic-resistant bacteria. It kills off any bacteria in sight while leaving healthy tissue completely alone and the bugs get no chance to develop a resistance to the substance because of the way it works.

It sounds impressive on paper and may sound too good to be true, but the group of scientists working on the antimicrobial substance have convinced no less than the European Commission that the team have a new way to kill bacteria without using antibiotics.

NUI Galway spin-out company Westway Health was formed in 2012 to develop and commercialise new antimicrobial substances and the EU research budget Horizon 2020 has invested €2.5 million to bring the product to market.

This should be enough support to get the product fully developed, tested for safety and efficacy and on the edge of full commercialisation in about three years, says the company’s CEO Dr Ruairi Friel. “The EU award will get us most of the way there.”

The product under development today goes back 10 years to work being done at NUIG by Prof Vincent O’Flaherty and Dr Paul McCay in the department of microbiology. They were looking to address the growing problem of bacterial resistance to antibiotics, not by developing new antibiotic drugs but by finding ways to use antimicrobials.

These substances kill bacteria but are not antibiotics and the search is on to find ones that can be used in veterinary and human medicine as an alternative treatment to get around the resistance issue.

Count 10 years on and the research team, which should number 11 scientists by the end of this year, has come up with new ways to wipe out bacteria without the risk of resistance.

“We have come up with two different systems that are highly effective at killing all bacteria, but that are highly unlikely to cause bacteria to develop resistance,” says Dr Friel.

He describes the treatment as “bio inspired” and is based on the idea of using two substances that react with one another to produce an “antimicrobial bullet”, reactive oxygen that kills the bacteria while leaving healthy tissue alone.

The treatment is also a real killer for bacteria. It doesn’t just wipe out a single bacterial species, it destroys any bacteria at the site of an infection.

The team’s next move was to focus on a suitable application for the treatment and it decided on bovine health, in particular using it to tackle mastitis.

“This is a huge problem in the dairy industry and in animal health. The US and EU dairy industries lose an estimated €3 billion a year treating it,” says Dr Friel.

Cows with the condition respond well to antibiotics but their milk after treatment must be discarded for about 10 days to prevent the drugs from reaching the human food chain.

“We have something in development that is not an antibiotic, effectively works on all bacteria and because it works on a natural system this will be the world’s first non-withdraw treatment for mastitis,” he says. This led to a product, PanaMast LC for lactating cows and then another, PanaMast DC for dry cows.

While the product works in a completely different way, farmers will still be very familiar with the product when in use. It will come in the same kind of udder injector as an antibiotic and will have a similar effect but without the risk of bacteria resistance.

The product is not yet reaching markets as it must be cleared by the European Medicines Agency and the US Food and Drug Administration. This will come provided Dr Friel and the rest of the team get the results they expect when a series of large-scale trials get under way at several locations across Europe.

“It is not difficult to find something that can kill bugs but it is a different thing to find something you can use therapeutically,” says Dr Friel. “It is a very challenging space and at the moment this looks extremely encouraging.”

The chemicals used in the process are well known and shown to be tolerated with little or no toxicity. The big question answered by the trials is whether the treatment works as well on the farm as it does in smaller tests.

The research undertaken in support of the project was recognised in 2013 when the company won the IntertradeIreland Seedcorn Competition outright. Then came the EU award which is a substantial investment in support of a new approach to bacterial resistance.

Assuming the treatment is tolerated and works well on bovines, even bigger opportunities open up in human health, says Dr Friel. And the substance can also be used in environmental sterilisation, for example ensuring there are no resistant bugs lurking in the operating theatre or other areas of a hospital where dangerous microbes can cause problems.

“It is absolutely frightening what could happen without the emergence of new antibiotics so to have something that could solve this is extremely exciting,” he says.

“It could be a game changer in the dairy industry and the potential of the technology is huge.”