Will Tourism NI find the magic formula to attract visitors? 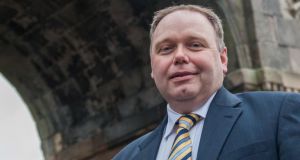 Ciaran O’Neill, who owns Bishop’s Gate hotel in Derry: “In the Republic there is a great appetite for short breaks – people think nothing of heading off to Galway, Dublin or wherever, and we need to tap into that.”

Tourism Northern Ireland has just launched its “Say Hello to More” campaign, which aims to show potential visitors what they have been missing when it comes to Northern Ireland – think castles, spa breaks and gourmet experiences rather than election posters.

The government-funded body claims the campaign, when it was originally trialled in the South, resulted in almost 200,000 visitors to Northern Ireland over a three-month period last autumn.

This time around it is hoping to target nearly four million adults North and South with the current campaign, which runs until March.

It could have its work cut out for it.

Latest tourism statistics show that the number of local residents who took overnight trips in the North fell by 6 per cent in the 12 months to September 2016 while, in contrast, trips made by residents from the Republic jumped by 10 per cent in the same timeframe.

One man who might have it is Ciaran O’Neill.

His Derry boutique hotel, Bishop’s Gate, is just about to celebrate its first birthday and has clinched a much-coveted placing in TripAdvisor’s 2017 Travellers’ Choice Awards.

The 30-bedroom hotel is located on the site of a Derry landmark – the Northern Counties Club, which was established in 1880.

It was named the second-best hotel in the UK in the top 25 hotels category in the Travellers’ Choice awards which TripAdvisor describes as the “highest honour it can bestow”.

For O’Neill, who has a career spanning 30 years in the hospitality industry in Northern Ireland and Scotland, this is first time owning a business and because of that, he says, the stakes are even higher.

“I started off with a blank canvas with Bishop’s Gate – it was a derelict building which was developed and restored by the Inner City Trust, and I am operating it on a long-term lease,” says O’Neill.

As part of its latest campaign Tourism NI has teamed up with the Northern Ireland Hotels Federation to develop 60 different experiences that feature in its spring 2017 campaign.

“It is vital that we get the message out about what a wonderful tourism product we have in Northern Ireland, and the Republic of Ireland is an untapped market for us. If you look at places like Scotland I don’t think we are selling Northern Ireland as well as they sell themselves.

“In the Republic there is a great appetite for short breaks – people think nothing of heading off to Galway, Dublin or wherever, and we want that short break business to come to us in Northern Ireland, we really need to tap into that. We’ve had a lot of visitors from the Republic to Bishop’s Gate and they really enjoyed the experience, so we know that we can offer what they want,” he adds.

O’Neill says while there are obvious concerns about what the impact of Brexit could mean for the local hospitality industry and its workforce who are not originally from the North, he believes that it also needs to be constantly looking to the future.

“The reality is at this time that the weak sterling is great for business but we need to continue to develop and invest in our product and what we have to offer – we’ve embraced tourism here and we no longer want to be a ‘best-kept secret’.”