Humans 2.0: building a better being with smart implants

Biohacker believes tech could be a lifesaver for some, such as those with Alzheimer’s 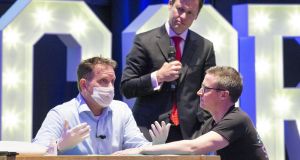 Most of us might blanch at the idea of having microchips implanted into our bodies, but it is likely to become an increasingly everyday phenomenon in the years ahead.

It may simply be a lifestyle choice for those of us who will be keen to harness technology to enhance what we already have. But for others, such as those living with Alzheimer’s disease, it could be a lifesaver, helping to give back what has been taken away from them.

This is according to Dr Patrick Kramer, a biohacker who has made it his life’s work to focus on what he and others describe as “human augmentation or ‘Humans 2.0,’ as it is also known.’

Dr Kramer was in Ireland earlier this month as a keynote speaker at the Cork Tech Summit, where he also performed what is believed to have been the country’s first live smart chip implantation live on stage.

Speaking to The Irish Times shortly after his appearance at the event, Dr Kramer said some people want implants purely so they can do away with the items they have in their wallets and purses. He believes such chips could be used for far more important reasons, however.

“We could save 20 per cent more lives if people had smart implants in their hands that had all their medical data contained on them,” he said.

Dr Kramer said that implants that had vital information stored on them such as telephone numbers of people to call, lists of allergies and medical conditions and so on, could be critical for anyone involved in an accident.

“If someone with an implant found themselves in hospital, all the vital information about them would be available to download immediately, saving valuable time and resources for health professionals,” he said.

“Such implants could be like insurance policies. Hopefully you’d never need to use it but you’d be glad you had it if you had an emergency.”

Dr Kramer claimed that such implants could also be a godsend for those with memory issues.

“This technology could help provide dignity to those who have issues memorising things and in particular for those who develop dementia,” he said.

Such a scenario might seem improbable currently, but Dr Kramer insists we’re not too far away from living in a society where implants are the norm.

“At the moment there are probably about 60,000 people around the world who have microchip implants fitted but the number is growing. A few years ago if you thought of someone in that situation you’d immediately assume they’d be a hacker or a tech nerd but it is becoming more mainstream. I now have a lot of families coming to me to have them fitted for example,” he says.

Dr Kramer is not alone in seeing a future in which cyborgs become more commonplace.

“Human augmentation is just at the beginning of the innovation trigger phase,” it claimed in its forecast.

“This technology is upwards of 10 years from mainstream adoption, but has the potential to create a multi-billion dollar market,” the research firm added.

Dr Kramer, who as one might expect is chipped, (he currently has three implants) is based in Hamburg, Germany. In addition to appearing as a keynote speaker/evangelist for human augmentation at tech conferences and trade shows around the world, he is also founder, chief executive and “chief cyborg officer” of Digiwell, a company that sells and fits smart implants.

Moreover, he is a co-founder of VivoKey Technologies, a start-up creating next-generation NFC-based digital implants for identity, security, cryptography, and payment applications.

The biohacker agrees that the rise of the cyborg will not be an overnight revolution. He believes that step by step, we’ll increase the amount of technology we have inside our bodies, as we come to see how much we gain from the move.

He adds that our initial use of implants won’t necessarily be for groundbreaking reasons but simply due to convenience.

Smart implants have been developed that allow you to forego carrying house keys and work ID badges around with you. Pretty soon, you might not even need to bother bringing wallets or purses either, according to Dr Kramer.

“Application drives acceptance. If you think about the three things we never leave the house with they are keys, wallets and smartphones. These three objects are very much the symbols of modern life and if we lose one of these items it causes big problems,” he says.

“With the first generation of smart implants we’ve already got rid of the need for people to carry keys. With the second generation, we are looking at how to get rid of your wallet and all the cards that you have in it. Once we have this worked out it will change everything because once people can pay for goods and services simply by waving a hand, the acceptance rate for implants will soar.”

It may be a while longer (if ever) before implants replace the smartphone. But, Dr Kramer believes that if such a scenario did occur we’d possibly be better off.

“There are lots of concerns around implants with people worried they’ll be tracked wherever they go but this is not the case. If anything, we have more to fear from smartphones than implants because with those we really can be tracked by them as we are on the go,” he says.

While others may disagree, Dr Kramer can’t see any disadvantages to having implants.

“You don’t see them and don’t even have to use them either but they can be there just to make your life easier should the need the arise,” he says.

“One thing is for sure: this industry is set to be one of the biggest on the planet because humankind is not going to wait for evolution to give us better brains and bodies. We’re looking to take care of that ourselves,” Dr Kramer added.